Home » Energy » For Whom is Peak Oil Coming? If you own a Diesel Car, it is Coming for you!

For Whom is Peak Oil Coming? If you own a Diesel Car, it is Coming for you!

For Whom is Peak Oil Coming? If you own a Diesel Car, it is Coming for you!

At the beginning, the idea of “peak oil” seemed to be relatively uncomplicated: we would climb from one side and then go down the other side. But no, the story turned out to be devilishly complex. For one thing, there is no such a thing as “oil” intended as a combustible liquid — there are tens, perhaps hundreds, of varieties of the stuff: light, heavy, sour, sweet, shale, tight, dumbbell, and more. And each variety has its story, its peculiarities, its trajectory over time. Eventually, all the oil curves have to end to zero but, in the meantime, there is a lot of wiggling up and down that continues to take us by surprise. Mostly, we didn’t realize how rabidly the system would deny the physical reality of depletion, much preferring to “legislate scarcity” on the basis of pollution.

Here, Antonio Turiel writes a fascinating post telling us how the peak is coming “from below,” affecting first the heavy fraction of crude oil: diesel and fuel oil. That’s already causing enormous problems for the world’s transportation system, as well as for the owners of diesel cars, and the situation will become much more difficult in the near future. The light fraction, the one that produces gasoline, seems to be still immune from peaking, but that will come, too.(U.B.) 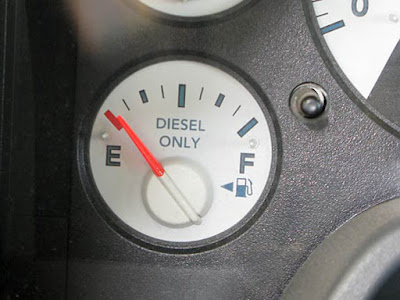 By Antonio Turiel (translated from “The Oil Crash“)
Dear Readers,
Six years ago we commented on this same blog that, of all the fuels derived from oil, diesel was the one that would probably see its production decline first.

← Russia And Ukraine Are On The Brink Of War – And Why That Could Lead To World War 3 ANALYSTS TOTALLY WRONG ABOUT GOLD: Top Gold Miners Production Cost Still Provides Floor In The Market Price →