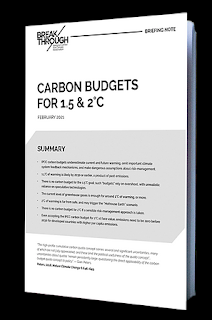 Confused about carbon budgets for the Paris climate  goals? Zero by 2050 or 2030? 1.5°C or 2°C? Overshoot or not?
There is a maze of contradictory positions,  claiming to be based on research evidence. But the assumptions behind much of that evidence obscures some startling conclusions.

The Breakthough Briefing Note on “Carbon budgets for 1.5 & 2°C”,  released today, explores some of the myths and realities about the Paris Agreement targets and the associated carbon budgets, and what it would really take to achieve them.

The main findings are:

And it’s not that this blog has been avoiding the issue of carbon budgets. Far from it! Our posts since 2009 include:

← Permaculture Gold vs. the stock market →