Oil prices have plunged to one-year lows, but refiners in certain parts of the U.S. are not benefitting from cheaper crude.

In November, U.S. gasoline demand is expected to have averaged 9.2 million barrels per day (mb/d), down 262,000 bpd from a year earlier. 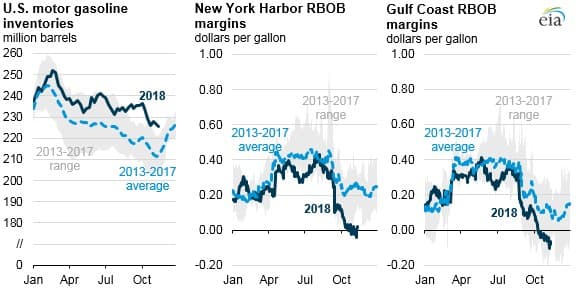 Meanwhile, prices for distillates, such as diesel, are much higher. The discrepancy is notable, and the markets for gasoline and distillates have diverged sharply this year. The forthcoming 2020 International Maritime Organization regulations on sulfur content in maritime fuels is set to push extremely dirty heavy fuel oil out of the mix for ship-owners. One of the most important replacements for fuel oil be diesel and gasoil – in other words, distillate demand is set to spike at the start of 2020. In anticipation of these regulations, distillate prices are seeing upward pressure.

With diesel prices on the rise and gasoline prices heading in the other direction, refiners might want to maximize diesel output. However, things aren’t that simple. As the EIA notes, for every barrel of crude oil processed in a refinery, it tends to yield twice as much gasoline as it does diesel. “As a result, although gasoline margins have been low recently, refiners cannot completely stop making gasoline in favor of other petroleum products, such as distillate,” the EIA said. 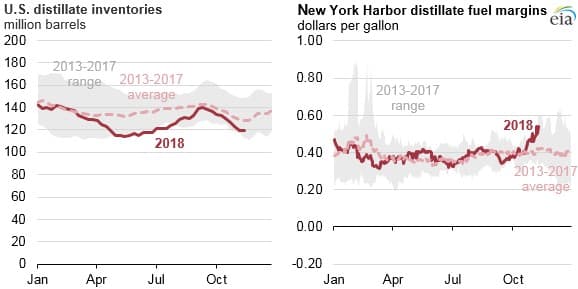 ← Truth Is What We Hide, Self-Serving Cover Stories Are What We Sell Could GE’s Slow Collapse Ignite A Financial Crisis? →