Home » Economics » The pandemic as the end of consumerism. Everything that’s happening is happening because it had to happen

The pandemic as the end of consumerism. Everything that’s happening is happening because it had to happen

By olduvai in Economics, Energy, Environment, Liberty, Survival on November 30, 2020.

The pandemic as the end of consumerism. Everything that’s happening is happening because it had to happen 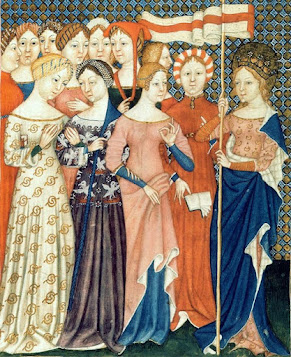 These Medieval ladies look like fashion models. With their splendid dresses in silk brocade, they are displaying their wealth in an age, the 14th century, in which Europe was enjoying a period of economic growth and prosperity. They couldn’t have imagined that, one century later, Europe would plunge into the terrible age of witch hunts that would put women back to their place of child-making tools. It is the way history works, it never plans, it always reacts, sometimes ruthlessly. And all that happens had a reason to happen (above, miniature by Giovanni da Como, ca.1380)

Can you tell me of at least one case in history where a society perceived a serious threat looming in the future and took action on it on the basis of data and rational arguments? With the best of goodwill, I can’t. Societies react to threats using a primeval stimulus-reaction that may be aggressive or defensive, but that’s almost never rational.

Curiously, our society, that we call sometimes “The West,” was the first in history to have a chance to do something rational to avoid the destiny awaiting it much before the threat was clearly visible. It was in 1972 when the newly developed digital computers were coupled with a powerful analytical tool, “system dynamics.” The result was the study called “The Limits to Growth” that foresaw how the gradual depletion of natural resources coupled with increasing pollution (that today we call “climate change”) would cause the whole Western economic system to collapse at some moment during the first half of the 21st century. The study also suggested rational solutions to avoid collapse: reduce consumption, stop population growth, manage pollution, and the like.