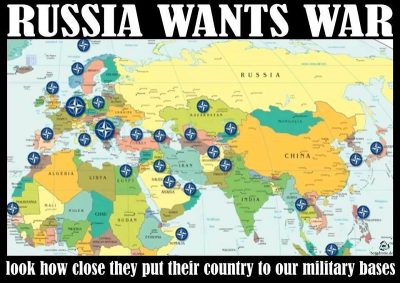 Recent attempted infringements of Russia’s airspace and maritime borders by NATO are very dangerous instances of de-facto brinksmanship intended to provoke the Eurasian Great Power into reacting in a way that could then be manipulated as the “plausible pretext” for imposing further pressure upon it.

It seems like almost every week that Russian media reports on NATO’s attempted infringement of Russian airspace and maritime borders, but two ultra-dangerous developments occurred over the past week which signify that this trend will intensify. The Russian Navy threatened to ram the USS John McCain after it aggressively passed into the country’s territorial waters near Peter the Great Bay off Vladivostok, after which it thankfully reversed its course. The second incident involved the US launching rockets into the Black Sea from Romania that are capable of reaching Crimea in a wartime scenario. These two events deserve to be discussed more in detail because of their significance to NATO’s grand strategy.

The transatlantic alliance intends to provoke the Eurasian Great Power into reacting in a way that could then be manipulated as the “plausible pretext” for imposing further pressure upon it. It amounts to de-facto brinksmanship and is therefore incredibly dangerous since both parties are nuclear powers. Furthermore, it’s the definition of unprovoked aggression since Russia doesn’t partake in symmetrical provocations against NATO. If anything, every time that it’s been dishonestly accused of such was just the country carrying out military exercises within its own borders which just so happen to abut several NATO states after the bloc extended its frontiers eastward following the end of the Old Cold War.

← The pandemic as the end of consumerism. Everything that’s happening is happening because it had to happen How Rethinking Affordable Homes Connects with the Climate Fight →