Home » Economics » Is High Inflation Now A Bigger Danger Than A Deflationary Crash?

Is High Inflation Now A Bigger Danger Than A Deflationary Crash?

Is High Inflation Now A Bigger Danger Than A Deflationary Crash?

What’s the more likely event at this point: a deflationary crash or runaway inflation?

For a long time, Peak Prosperity co-founder Adam Taggart and I have hewed to the “Ka-POOM!” theory, which states that a major deflation will scare the central banks so badly that they overreact and pour too much liquidity into the system, thereby destroying it.

To visualize how this will play out, think of what happened in Beirut this week. Customs officials there stored thousands of tons of ammonium nitrate fertilizer at their seaport, for years.  The pile just sat there doing absolutely nothing.

After years of inaction, the port authorities became lulled into the erroneous conclusion that nothing would ever happen.

But then one day a spark came to life, starting a fire, and then all at once — POOM! — the entire thing blew up with devastating effect.

This analogy works pretty well here as we approach the Keynesian endgame facing the global economy.  The pile of $trillions in bad debts issued over the past decades has been the fertilizer.  Covid-19 was the spark. And now we’re simply waiting for the entire economic and financial system to explode.

The same process began in the US and has been unfolding across the world ever since after the gold standard was abandoned in 1971.  Untethered from any restraint, all that was left to staunch the flow of red ink was self-restraint and a concern for the future, both of which were in short supply.

Not only has debt been growing far faster than income (GDP) at the national level, but debts have been growing exponentially (i.e., ‘compounding’) ever since 1971: 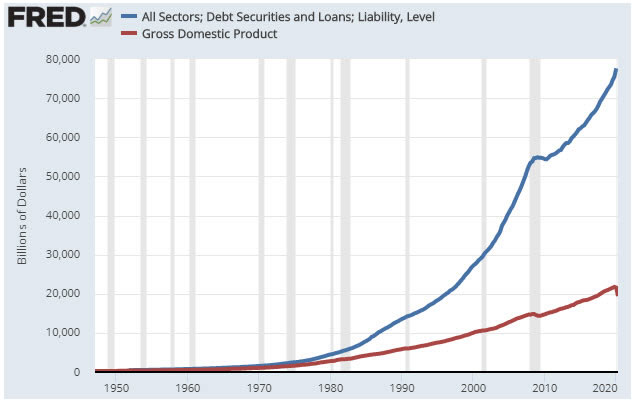 That debt growth is a nearly perfect exponential curve upon which the entire systems of politics, banking and the economy have come to rely.

← The return of home-grown cereals What Are You Going To Do As Our Money Dies? →