CHART OF THE WEEK: The Surprising Drop In U.S. Crude Oil Production

U.S. crude oil production experienced a surprising drop last week, even though domestic demand for oil and petroleum products increased.  This came as a surprise to some energy analysts.  Furthermore, the IEA, International Energy Agency came out with a forecast for global oil demand to fall 8.1 million barrels per day in 2020.

I have to say, this is terrible news coming from the IEA.  Just last month, the IEA stated that global oil demand could fall to 7.1 mbd (million barrels per day), but only recently updated their forecast for an 8.1 mbd decline in 2020 due to “gloomy airline travel.”

Actually, we don’t really know what global oil demand will look like by the end of the year.  There are way too many variables.  Even though the Fed and central banks are planning to pump in more stimulus plans over the next few months, the negative SNOWBALL EFFECT of all the closed stores, unemployment, commercial real estate armageddon, collapse in airline travel, supply chain disruptions, and so forth, will likely impact oil demand to a greater degree by the end of 2020 and into 2021.

Another CURVEBALL to hit the United States is the coming collapse in U.S. Shale oil production.  While some companies have curtailed production, and are now bringing some of it back online, total U.S. crude oil production surprisingly declined to 10.7 mbd last week. 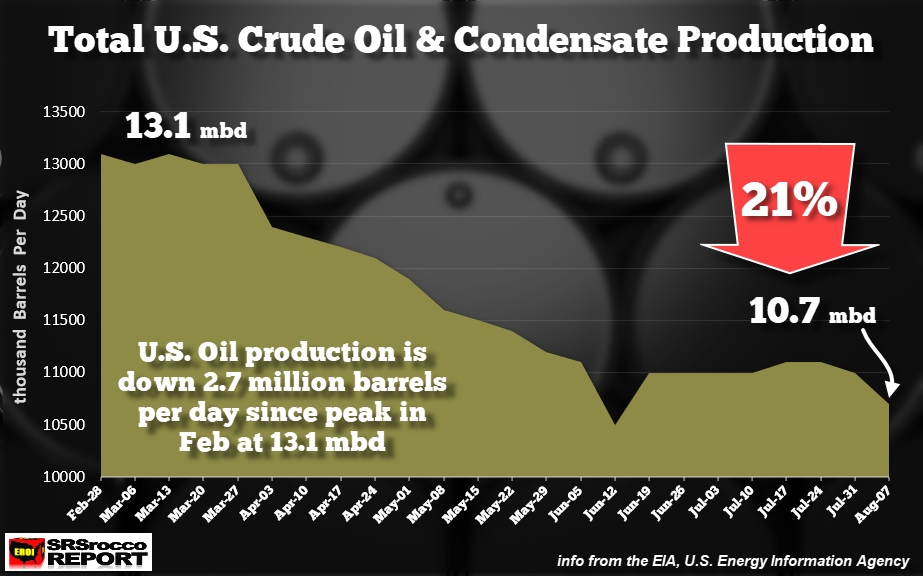 U.S. crude oil production reached a peak of 13.1 mbd in late February, right before the global contagion and shutdown of economies.  It fell to a low of 10.5 mbd in mid-June, then rebounded to 11.0 mbd for the next two months.  However, in the lasted EIA, U.S. Energy Information Agency weekly report, U.S. oil production fell from 11.0 mbd to 10.7 mbd last week.

← Turkey’s 2nd Financial & Currency Crisis in 2 Years Blossoms. Heavily Invested European Banks Look for Exit. But Not the Most Exposed Bank 10 Blackout-Proof Preps You Need To Get Through Extreme Weather Emergencies →