How do you encourage people to turn against each other during the COVID-19 pandemic?

The answer is not that complicated, especially if you live in the City of Bellevue, Washington.

Four years ago, when the city created the MyBellvue app, it was touted as being a quick and easy way to report things like downed street signs, potholes, street light issues and noise complaints. Fast forward to 2020 and public fears of COVID-19 have encouraged law enforcement to turn neighbors into government snitches.

Geekwirerevealed how the Bellevue Police Department has turned a public service app into a report on your neighbors app.  You can report these incidents through the MyBellevue app on your electronic device or the MyBellevue portal.

“Police in Bellevue, Wash., are asking residents to report violations of the state’s “stay home” order online in an effort to clear up 911 lines for emergencies.”

A recent Associated Pressarticle revealed that people are all to happy to report on their neighbors.

“Snitches are emerging as enthusiastic allies as cities, states and countries work to enforce directives meant to limit person-to-person contact amid the virus pandemic that has claimed tens of thousands of lives worldwide. They’re phoning police and municipal hotlines, complaining to elected officials and shaming perceived scofflaws on social media.”

LA Mayor Offers Snitches Rewards For Reporting On Neighbors
According to a CBS LA4article Los Angeles Mayor Eric Garcetti announced that the city would reward snitches.

Four businesses have been referred to the city attorney’s office for misdemeanor filings.

“You know the old expression about snitches, well in this case snitches get rewards,” Garcetti said. “We want to thank you for turning folks in and making sure we are all safe.”

Washington Declares State Of Emergency After First US Virus Death; CDC Says “No National Spread In US”: Live Updates

Washington Declares State Of Emergency After First US Virus Death; CDC Says “No National Spread In US”: Live Updates

Update (1530ET): Following the first death of a Coid-19-infected person in the US, Washington state has declared a state of emergency.

CDC’s Messonnier stated that “there is not a national spread of the virus in the US,” and adds that US has capacity to test 75,000 people.

Update (1515ET): President Trump has finally wrapped up a lengthy press conference that most agreed was more convincing than his previous effort on Wednesday. Trump confirmed that there are now 22 cases in the US outside of the evacuees from Wuhan and the ‘Diamond Princess’.

Read more about it here.

Washington State is expected to hold a press conference of its own at 4 pm ET.

Update (1350ET): Trump is officially 20 minutes late, and following reports about Trump tightening the border with Mexico, the governor of the northern Mexican state of Coahuila has confirmed what appears to be the country’s fourth case.

Here’s more on the border reports from Reuters.

The administration is also weighing possible restrictions on the entry of travelers from South Korea, Italy and Japan. The White House instructed DHS to draft a range of options about travel restrictions related to those countries.

Is Global Warming A Significant Contributor to Washington State Wildfires, Now or in the Future?

Is Global Warming A Significant Contributor to Washington State Wildfires, Now or in the Future? 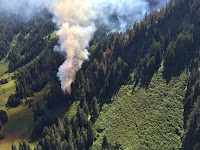 If 90% of the blame for Northwest wildfires is due to anthropogenic (human-caused) global warming and 10% is due to fire suppression, poor forest management, or people starting more fires, then the logical response is to put most of  our efforts into reducing atmospheric CO2.   A climate-dominated problem.

If 90% of the blame is due to past fire suppression, forest mismanagement, invasive species, and human encroachment, then we should put most of our efforts into fixing the forests and other non-climate measures. A surface-management problem.

And yes, the percentages could be somewhere in between.

Supporters of the carbon fee initiative (1631) are suggesting that the recent wildfires are mainly the result of anthropogenic climate change and using the fires to push their carbon fee plan.

And Governor Inslee has stated explicitly that the fires have been made much worse by climate change.

In contrast, others, including a number of folks in the forestry community, have suggested that poor forest practices are the main cause of most of the wildfires over the eastern side of the state.

It is important to note that relative role of global warming in influencing the threat of wildfires may change in time.  For example, global warming could be relatively unimportant today for wildfires, but of great importance later in the century when temperatures will be much warmer.

The Need for Better Information NINE MONTHS AFTER pipeline opponents in Washington state staged a protest that blocked freeway traffic, Facebook ended a protracted legal standoff with a county prosecutor, turning over detailed records on the indigenous-led group behind the demonstration. Despite the fact that no criminal charges have been filed in connection with the February action, Whatcom County Prosecuting Attorney David McEachran repeatedly sought a warrant for the group’s Facebook page, ultimately securing private information including messages to and from the page and a list of everyone “invited” to the protest event.

McEachran’s first two warrant applications were withdrawn after the American Civil Liberties Union and Facebook raised objections. On the third try, however, the warrant was granted thanks to Facebook’s suggestion that McEachran’s office seek formal guidance from the nation’s top law enforcement agency, the Department of Justice. A public records request filed by The Intercept shows that the local agency and its federal counterpart cooperated to draft the ultimately successful warrant using a DOJ template.

Activists affiliated with the climate justice group, Red Line Salish Sea, view the investigation as retaliation for their February protest, a march against local fossil fuel projects and President Donald Trump’s executive orders expediting construction of the Dakota Access and Keystone XL pipelines. “Not only does this warrant attempt to scare people from organizing, this warrant attempts to scare people from even looking at information,” Tina McKim, an administrator of Red Line’s Facebook page, wrote in a declaration.

Will Washington state have the nation’s first carbon tax?

Will Washington state have the nation’s first carbon tax?

Yoram Bauman is the world’s only “stand-up economist.” He makes his living poking fun at economics and economists. But he’s dead serious about fighting climate change, and he’s the intellectual force behind a climate-related initiative that seems likely to appear on Washington state’s November 2016 ballot.

If voters approve the measure, dubbed Initiative 732, it would implement the first carbon tax in the nation. The purpose would be to motivate households and businesses to cut down on the burning of fossil fuels, the major source of man-made emissions of carbon dioxide, the main greenhouse gas. By raising the price of fossil fuels it would encourage conservation and efficiency and the substitution of low-carbon and carbon-free sources of energy by making these energy sources more cost-competitive.

In this case, the proposal taxes carbon emissions at a rate of $25 per metric ton. The tax would be phased in over two years and increase each year after that by 3.5 percent plus the rate of inflation. The proposal lowers the sales tax by one full percentage point (from 6.5 percent to 5.5 percent) and provides a rebate to poor families of up to $1,500 to lessen the burden of the carbon tax on their limited incomes. Finally, it virtually wipes out the so-called business and occupation tax on manufacturers in the state. For manufacturers–which tend to be more energy-intensive than other types of businesses–that tax falls from 0.44 percent of gross business receipts to 0.001 percent.