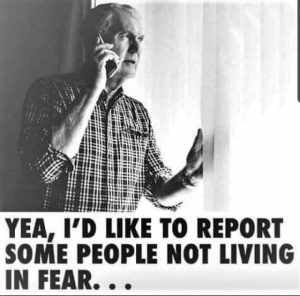 America’s sweetheart, Dr. Fauci, would like to divide families this holiday season by urging people to ensure their relatives and friends are vaccinated. Fauci said only vaccinated groups should gather so that “vaccinated people can feel comfortable.” So tell your grandfather with the pacemaker to stay home alone this Christmas. Perhaps tell your cousin not to bring her unvaccinated baby too. “That’s the reason why people should, if they invite people over their home, essentially ask and maybe require that people show evidence that they are vaccinated,” Dr. Fauci actually said out loud.

This is exactly what the Stasi did in former East Germany until the Ministry for State Security (Stasi) was abolished in March 1990. The Stasi encouraged people to spy on neighbors, friends, and relatives. Children were expected to turn their parents into the state. Under their premise, your loyalty should stand with the state first and foremost.

Snowden’s leak stated that today’s NSA can compile 5 billion mobile records per day, and 42 billion internet records per month. The FBI recently released a document stating they can hack into iMessage and WhatsApp within 15 minutes. The advancement in technology has paved the way for a police state to control the public far beyond anything the Stasi pulled. The government is not your family.

Do We Need to Bring Back Internment Camps?

Do We Need to Bring Back Internment Camps?

Last week, Retired General Wesley Clark, who was NATO commander during the US bombing of Serbia, proposed that “disloyal Americans” be sent to internment camps for the “duration of the conflict.” Discussing the recent military base shootings in Chattanooga, TN, in which five US service members were killed, Clark recalled the internment of American citizens during World War II who were merely suspected of having Nazi sympathies. He said: “back then we didn’t say ‘that was freedom of speech,’ we put him in a camp.”

He called for the government to identify people most likely to be radicalized so we can “cut this off at the beginning.” That sounds like “pre-crime”!

Gen. Clark ran for president in 2004 and it’s probably a good thing he didn’t win considering what seems to be his disregard for the Constitution. Unfortunately in the current presidential race Donald Trump even one-upped Clark, stating recently that NSA whistleblower Edward Snowden is a traitor and should be treated like one, implying that the government should kill him.

These statements and others like them most likely reflect the frustration felt in Washington over a 15 year war on terror where there has been no victory and where we actually seem worse off than when we started. The real problem is they will argue and bicker over changing tactics but their interventionist strategy remains the same.

Retired Army Gen. Mike Flynn, who was head of the Defense Intelligence Agency during the US wars in Afghanistan and Iraq, told al-Jazeera this week that US drones create more terrorists than they kill. He said: “The more weapons we give, the more bombs we drop, that just … fuels the conflict.”

If these people are radicalized and don’t support the United States, and they’re disloyal to the United States, as a matter of principal that’s fine, that’s their right. It’s our right and our obligation to segregate them from the normal community for the duration of the conflict.

Noting that the recent tyrannical, entirely anti-American comments made by General Wesley Clark during a MSNBC interview are statist and disturbing would be the understatement of the century.

What General Clark is advocating in no uncertain terms is that the U.S. rewrite its laws to allow for the internment of Americans who the government feels have engaged in thought crime. Mind you, laws on the books are sufficiently strong to punish people engaged in actual criminal behavior. What Clark is suggesting is forcibly separating people based on their political views.

Sure, he couches it in the war against ISIS (an entity created by U.S. government foreign policy), but once you make it policy to disappear people based on one particular type of thought, it will quickly spread to other undesirable political views.

Please share this video with everyone you know. It’s that crazy: