Three months ago, British oil giant BP Plc. (NYSE:BP) sent shockwaves through the oil and gas sector after it declared that Peak Oil demand was already behind us. In the company’s 2020 Energy Outlook, chief executive Bernard Looney pledged that BP would increase its renewables spending twentyfold to $5 billion a year by 2030 and ‘‘… not enter any new countries for oil and gas exploration.’’ That announcement came as a bit of a shocker given how aggressive BP has been in exploring new oil and gas frontiers.

The investing universe appears to concur with BP’s sentiments, with the oil and gas sector consistently emerging as the worst performer over the past decade. The sector suffered yet another blow after the largest investor-owned oil company in the world, ExxonMobil (NYSE:XOM), was kicked out of the Dow Jones Industrial Average in August, leaving Chevron (NYSE:CVX) as the sector’s sole representative in the index.

Meanwhile, oil prices appear stuck in the mid-40s with little prospects of climbing to the mid-50s that most shale producers need to drill profitably.

Delving deeper into the global oil and gas outlook suggests that it’s peak oil supply, not peak oil demand, that’s likely to start dominating headlines as the quarters roll on. 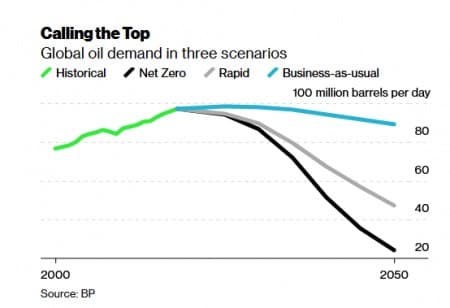 When many analysts talk about Peak Oil, they are usually referring to that point in time when global oil demand will enter a phase of terminal and irreversible decline.

According to BP, this point has already come and gone, with oil demand slated to fall by at least 10% in the current decade and by as much as 50% over the next two. BP notes that historically, energy demand has risen steadily in tandem with global economic growth with few interruptions; however, the COVID-19 crisis and increased climate action might have permanently altered that playbook.