Peak Diesel or no Peak Diesel? The Debate is Ongoing

Peak Diesel or no Peak Diesel? The Debate is Ongoing

In a recent post, Antonio Turiel proposed that the global peak of diesel fuel production was reached three years ago, in 2018. Turiel’s idea is especially interesting since it takes into account the fact that what we call “oil” is actually a wide variety of liquids of different characteristics. The current boom of the extraction of tight oil (known also as “shale oil”) in the United States has avoided, so far, the decline of the total volume of oil produced worldwide (“peak oil”). 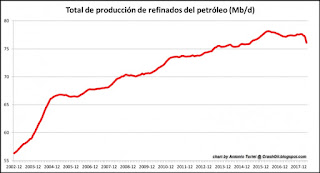 Shale oil has changed a lot of things in the oil industry, but it couldn’t avoid the decline of conventional oil. That, in turn, had consequences: shale oil is light oil, not easily converted to the kind of fuel (diesel) which is the most important transportation fuel, nowadays. That seems to have forced the oil industry into converting more and more “heavy” oil into diesel fuel but, even so, diesel fuel is becoming gradually more scarce and more expensive, to the point that its production may have peaked in 2015. In addition, it has created a dearth of heavy oil, the fuel of choice for marine transportation. In short, the famed “peak oil” is arriving not all together, but piecemeal — affecting some kinds of fuels faster than others.

Turiel’s proposal has raised a considerable debate among the experts, with several of them challenging Turiel’s interpretation. Turiel himself and Gail Tverberg (of the “our finite world” blog) discussed the validity of the data and their meaning. Below, I reproduce the exchange with their kind permission. As you will see, the matter is complex and at the present stage it is not possible to arrive at a definitive conclusion.