Here is our Friday digest of the important news, commentary, charts and videos we were informed by this week including our special podcast on Direct Access Gold.

From our perspective, the most important developments were the IMF’s financial warnings and the escalation in central bank gold buying with Hungary increasing its gold reserves by a whopping 1,000% due to increasing “safety concerns.”

For the first time since 1986, Hungary’s central bank is buying gold bullion – a lot of gold bullion.

The Eastern-European country announced that it had boosted its gold reserves ten-fold, up to 31.5 tons. It not only dramatically increased its reserves but also repatriated the gold from the Bank of England to Budapest due to concerns about “financial stability”.

Central banks in Europe are diversifying into gold or moving to repatriate and take “possession in country.”

Hungary and Poland are the most recent central banks to do this but they follow in the footsteps of Austria, Netherlands and the powerful German Bundesbank all of which have been repatriating their gold from the Bank of England and the Federal Reserve in recent months and years. 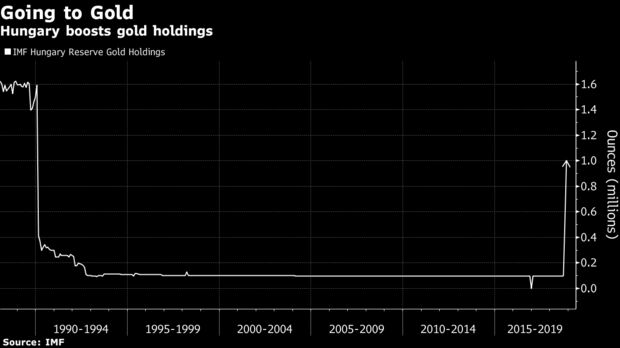 “Gold is still considered to be one of the world’s safest assets,” in the words of the Hungarian central bank.

This view is shared by the President of the ECB Mario Draghi who in February 2013 spoke about how “gold is a reserve of safety” which “gives you a value-protection against fluctuations against the dollar.”

Central bank gold reserves remain very small versus the scale of their massive foreign exchange holdings and their significant exposure to the vulnerable dollar in particular but also the euro and other fiat reserve currencies.

← Skripal and Khashoggi: West Manufactures Absurd Fantasy to Pin on Russia, Lets Saudi Get Away With Chopping up WaPo Journalist Alive Gold Is Becoming Cool Again →