Three New Deals: Why the Nazis and Fascists Loved FDR

Three New Deals: Why the Nazis and Fascists Loved FDR 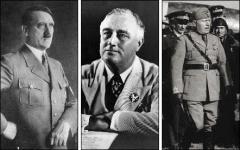 Critics of Roosevelt’s New Deal often liken it to fascism. Roosevelt’s numerous defenders dismiss this charge as reactionary propaganda; but as Wolfgang Schivelbusch makes clear, it is perfectly true. Moreover, it was recognized to be true during the 1930s, by the New Deal’s supporters as well as its opponents.

When Roosevelt took office in March 1933, he received from Congress an extraordinary delegation of powers to cope with the Depression.

The broad-ranging powers granted to Roosevelt by Congress, before that body went into recess, were unprecedented in times of peace. Through this “delegation of powers,” Congress had, in effect, temporarily done away with itself as the legislative branch of government. The only remaining check on the executive was the Supreme Court. In Germany, a similar process allowed Hitler to assume legislative power after the Reichstag burned down in a suspected case of arson on February 28, 1933. (p. 18).

The Nazi press enthusiastically hailed the early New Deal measures: America, like the Reich, had decisively broken with the “uninhibited frenzy of market speculation.” The Nazi Party newspaper, the Völkischer Beobachter, “stressed ‘Roosevelt’s adoption of National Socialist strains of thought in his economic and social policies,’ praising the president’s style of leadership as being compatible with Hitler’s own dictatorial Führerprinzip” (p. 190).

Nor was Hitler himself lacking in praise for his American counterpart. He “told American ambassador William Dodd that he was ‘in accord with the President in the view that the virtue of duty, readiness for sacrifice, and discipline should dominate the entire people. These moral demands which the President places before every individual citizen of the United States are also the quintessence of the German state philosophy, which finds its expression in the slogan “The Public Weal Transcends the Interest of the Individual”‘” (pp. 19-20). A New Order in both countries had replaced an antiquated emphasis on rights.