Yes, it’s true.  Middle East net oil exports are less than they were 40 years ago.  How could this be?  Just yesterday, Zerohedge released a news story stating that OPEC oil production reached a new record high of 34.19 million barrels per day.  To the typical working-class stiff, driving a huge four-wheel drive truck pulling a RV and a trailer behind it with three ATV’s on it, this sounds like great news.

Unfortunately for the Middle East, this isn’t something to celebrate.  Why?  Well, let’s just say, there’s more to the story than record oil production.

While the Middle East oil companies were busy working hard (spending money hand over fist) to produce this record oil production, their wonderful citizens were working even harder to consume as much oil as they could get their hands on.

In the past 40 years, Middle East domestic oil consumption surged more than six times from 1.5 million barrels per day (mbd) in 1976, to 9.6 mbd in 2015.  This had a seriously negative impact on rising Middle East oil production: 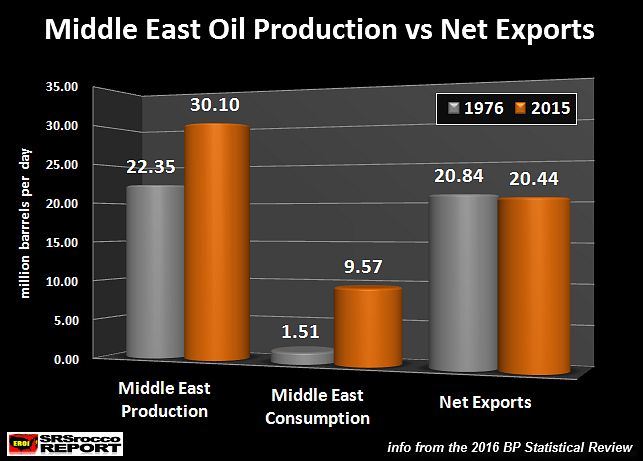 ← The Ultimate “Fake News” List What has gone wrong with oil prices, debt, and GDP growth? →