The National Hurricane Center (NHC) is closely monitoring “powerful” Hurricane Teddy as it continues to churn in the Atlantic Ocean and could make landfall in Canada early next week.

As of 0500 ET Friday, Teddy is generating 130 mph winds (Category 4) while moving northwest at 12 mph and located about 900 miles southeast of Bermuda. The system is expected to make landfall near Nova Scotia, Canada, as a Category 2, on Tuesday/Wednesday.

“It’s still quite a distance out and a lot of things could happen between now and then.

“It looks like it’s going to intensify to a 4 maybe by the end of the afternoon (Friday), so it’s a powerful system. The danger with this system is that it’s not tracking over or close to land. When systems do that, the outer bands … when they start to brush up against coastline or land, it weakens the storm system. There’s no land around. It’s out in the mid-Atlantic and it’s just churning and the sea surface temperatures are warmer than normal. So right now, there’s nothing to weaken this system,” said Day.

Day said some weather models have Teddy taking a northwest turn before heading for Nova Scotia, indicating landfall could be between Yarmouth and Halifax.

“That’s how I see the path unfolding, but again a little shift in the system over the Labrador Sea and the high coming in from Quebec and that could get squeezed further to the left or further to right. It looks like there’s going to be some impact, but how significant and where landfall is going to be – it’s a little bit too soon to say just yet.”

‘I Want Them to Have Justice’: Inside the Fight to Save the Shubenacadie River

‘I Want Them to Have Justice’: Inside the Fight to Save the Shubenacadie River

In Nova Scotia, water protectors have fiercely opposed a gas company’s plans for a decade, helped by a celebrity supporter.

It is so quiet on the banks of the Shubenacadie you can almost hear the river breathe.

Standing by the Treaty Truckhouse with Rachael Greenland-Smith and Dale Poulette, the instinct is to fall silent. The landscape draws you in with elemental power — an Alex Colville painting come to life.

Blue sky above, tawny long grass below, all of it bisected by the reddish tidal waters of the Shubenacadie. The only sound is the flapping of the Indigenous Unity flag when the wind picks up from the river.

The RCMP didn’t want any flags flying on nearby Treaty Island, but Mi’kmaq water protectors felt they had no choice. They believed that the Alton Gas company’s storage project, which would dump huge amounts of brine into the Shubenacadie, would endanger the river.

The company wants to build massive underground caverns to store natural gas. It would use river water to flush out salt deposits at a site 12 kilometres away, creating the caverns. The salty water would then be pumped back into the river over a few years.

Life, the Sea and Big Oil

Life, the Sea and Big Oil

“It is a curious situation that the sea, from which life first arose, should now be threatened by the activities of one form of that life. But the sea, though changed in a sinister way, will continue to exist: the threat is rather to life itself.”

When I learned about the oil giant BP’s plan to drill off the coast of my home, my heart felt like it dropped out of my chest. As I write this the West Aquariusrig is well on its way to the Nova Scotian Shelf. By the time this is published, it might have already arrived. My thoughts went immediately to those oil sullied shorelines in the Gulf of Mexico, and to the fishermen there whose families and livelihoods were shattered to pieces, and the countless species of fish, mammals and marine birds suffocated in the earth’s primordial blood. BP forever damaged that region and not only in an environmental way. The scars, the untraceable diseases, the suicides and domestic conflicts induced by despair, the financial ruin, displacement and alienation persist to this day.

Many of my ancestors were fishermen here in Nova Scotia for generations. They negotiated the treacherous storms endemic to the North Atlantic and many of them perished in the icy waters which surround this rocky, unforgiving peninsula. I’ve several relatives whose livelihoods are still dependent upon the ocean. But it is more than just a job. The sea is entwined with one’s heart here. It informs the culture, the food, the language. The life of this province cannot be separated from it.

Until settlers stole their ancestral lands, Mi’kmaq, the region’s First People, lived in balance and harmony with this sea for thousands of years, carefully studying its character and respecting its surly and churlish mood swings.

Some may have to wait until 11:30 p.m tonight before power is restored 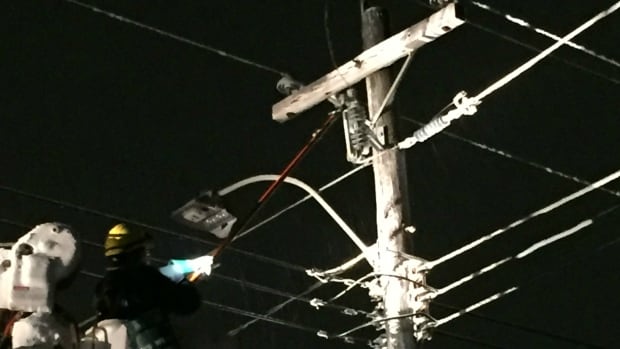 It’s a cold morning for thousands of people in Cape Breton and northern Nova Scotia as they spend a second day without electricity and two two hospitals continue to operate with power from emergency generators.

Some have been without electricity since Friday evening, several areas in Cape Breton, Antigonish, Goshen, Sheet Harbour and Stellarton are affected.

Nova Scotia Power estimates that some customers will not have their power restored before 11:30 p.m. Sunday, although those estimates could change as the day goes on.

Heavy snow led to the outages and is making it difficult for power crews to get into areas and do repair work.  The utility said it’s doing everything it can to get power back as quickly as possible.

“We’re throwing every resource we have at this,” said NSP spokeswoman Sarah Dawson.

While people wait for the power to come back on warming stations are expected to reopen this morning at fire halls in Glace Bay, Reserve Mines, Sydney River, Florence, Scotchtown, Albert Bridge and Louisbourg.

“It doesn’t allow you to run every electrical appliance or everything at the same time,” said Gregory Boone spokesman for the Nova Scotia Health Authority.

How a federal ‘no’ to Nova Scotia mine got whacked by NAFTA’s tribunal.

Canada lost a big chunk of its sovereignty as well as its right to protect local communities from bad developments earlier this year in a little reported NAFTA tribunal decision.

The bizarre Bilcon case also represents a perfect example of why Investor-State Dispute Settlement (ISDS) provisions, now commonplace in international trade agreements such as the Trans-Pacific Partnership deal, face increasing resistance from citizens around the world.

The investor trade law expert Gus Van Harten has defined the ISDS or new pseudo-courts deftly. Their purpose “is to protect foreign investors, meaning usually the world’s wealthiest companies and people, from the rest of us. Instead of public courts, you now have private lawyers sitting as ‘arbitrators’ with the power to decide how much Canadians must pay to compensate foreign investors for our country’s decisions.”

Tellingly, the ruling can’t be contested under Canadian law.

The dismal facts are these. The Delaware-based firm Bilcon wanted to blast, crush, wash and stockpile millions of tons of rock a year and to build a 170 metre-long marine terminal that would load cargo ships with approximately 40,000 tons of aggregate, every week over a 50-year period.

Lots of Nova Scotians objected to the mining export project on the grounds that it would degrade a precious resource: the beautiful Bay of Fundy.

A joint federal review environmental panel noted that Bilcon didn’t do a very good job talking to First Nations or fishermen either.

TORONTO (Reuters) – Canadian police said on Friday they foiled a plot in which at least two people allegedly planned to commit a mass shooting in the East Coast province of Nova Scotia on Valentine’s Day.

The Royal Canadian Mounted Police (RCMP) said in a statement the plot involved a 19-year-old man from Timberlea, Nova Scotia, and a 23-year-old woman from Geneva, Illinois.

Police said they obtained information that suggested the two had access to firearms and intended to go to a public venue in the Halifax, Nova Scotia, region on Feb. 14 to kill people, and then themselves.

The police statement did not suggest a possible motive, but officers told a media briefing they would not characterize it as a “terrorist event.”

“I would classify it as a group of individuals that had some beliefs and were willing to carry out violent acts against citizens, but there’s nothing in the investigation to classify it as a terrorist attack,” said Nova Scotia RCMP Commanding Officer Brian Brennan, according to CBC News.

“I can tell you that it’s not culturally based.”

Evidence suggested two other Nova Scotia males, aged 20 and 17, were involved, though their role is still to be determined, police said.

“We believe we have apprehended all known individuals in this matter and eliminated the threat. We are not seeking any further suspects at this time,” the statement said.