By olduvai in Economics, Geopolitics on December 29, 2022. 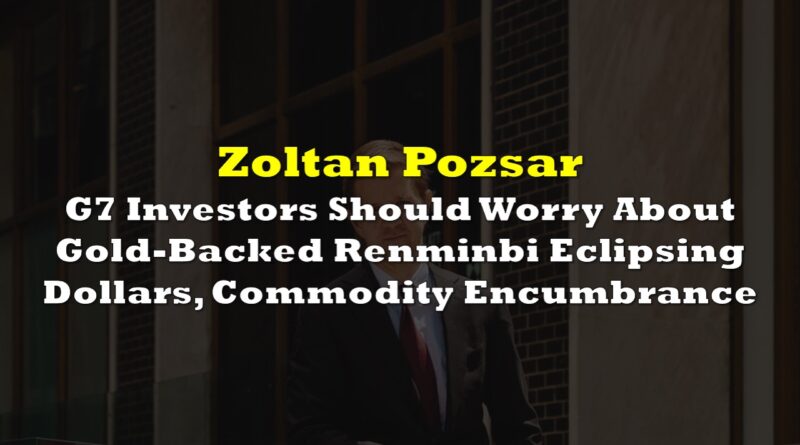 Credit Suisse contributor Zoltan Pozsar has continued his ongoing series about Bretton Woods III where commodities will dictate the new world order. For his last dispatch of the year, he described how the world is now shifting to a multipolar order “being built not by G7 heads of state but by the ‘G7 of the East’ (the BRICS heads of state).”

BRICS stands for the group of five nations: Brazil, Russia, India, China, and South Africa. But Pozsar said that with the poised expansion via rumored applications for Saudi Arabia, Turkey, or Egypt, he took the liberty to round up the current “G5.”

The author focused on Chinese President Xi Jinping’s speech at the recent summit in the Arab states, which for Pozsar is very telling on how Beijing plans to outmaneuver the West in global economy.

“Fixed income investors should care – not just because the invoicing of oil in renminbi will hurt the dollar’s might, but also because commodity encumbrance means more inflation for the West,” Pozsar said.

In the next three to five years, China is ready to work with GCC [Gulf Cooperation Council] countries in the following priority areas: first, setting up a new paradigm of all-dimensional energy cooperation, where China will continue to import large quantities of crude oil on a long-term basis from GCC countries, and purchase more LNG. We will strengthen our cooperation in the upstream sector, engineering services, as well as [downstream] storage, transportation, and refinery. The Shanghai Petroleum and Natural Gas Exchange platform will be fully utilized for RMB settlement in oil and gas trade, […] and we could start currency swap cooperation and advance the m-CBDC Bridge project.

← Lviv & Kiev Plunged Into Darkness After ‘Massive’ Missile Attack; Ukrainian S-300 Lands In Belarus Can geoengineering fix the climate? Hundreds of scientists say not so fast →