Home » Liberty » Propaganda: the Doom of the Western Empire

Propaganda: the Doom of the Western Empire

Propaganda: the Doom of the Western Empire 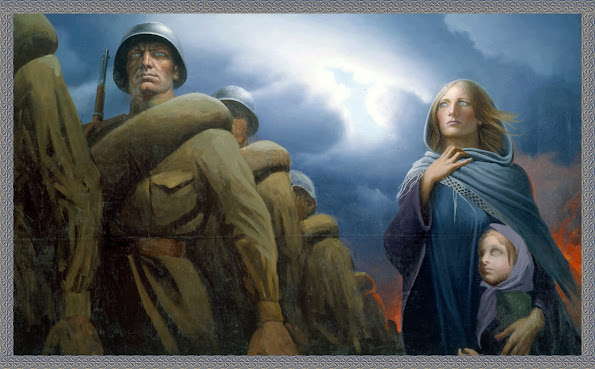 This painting by Konstantin Vasiliev (1942-1976) celebrates the great patriotic war of 1941-1945 (Вели́кая Оте́чественная война́). It is a good example of Soviet propaganda at its best. But, on average, propaganda in the Soviet Union was primitive and heavily based on censorship, eventually turning out to be unable to keep together the Union in a moment of crisis. In the West, propaganda was much more sophisticated and, for a while, it managed to convince Western citizens that they were told the truth by their governments. That phase is now over and the Western propaganda system has reverted to a fully “Soviet-style” censorship system. With this development, the Western Empire may well have sealed its doom: no government can survive for long if the people it rules don’t believe in it.

“The devil’s finest trick is to persuade you that he does not exist.” Charles Baudelaire

I distinctly remember when I was a child and my father saw me reading a small book illustrated with images showing red flags, sickles, and hammers. Worried, he took it from my hands, looked at it, and gave it back to me. “It is all right,” he said. “It is our propaganda.”What I had in my hands was an anti-communist pamphlet of the 1960s, issued by the Christian Democratic party. I remember it well, it was full of images of evil Soviet Communists slaughtering their own dissidents, part of the general anti-communist propaganda in Italy of the post-war period.

← Mainstream Economists Struggling to Hide the Incoming Economic Collapse Climate tipping points: The Arctic is a Bellwether for Irreversible Change →