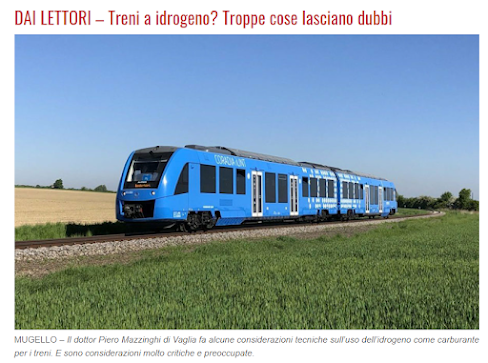 Hydrogen as a magic word hits Tuscany again. Now, it is the turn of the “Faentina” railroad to be greenwashed. It is an old line that connects Florence to the city of Faenza on the other side of the Appennini mountains. Destroyed during WWII, it was considered a “dead branch” by the Italian authorities and not rebuilt until the 1990s. Even then, it was a work done in economy, it was not electrified and only old diesel powered locomotives run on it.

But now, great idea! Politicians have started to say that we can make these same locomotives run on hydrogen! They say hydrogen is green, don’t they? Yes, so green that whatever you touch with it becomes well greenwashed.

A brief comment by Dr Piero Mazzinghi, translated from Italian.

MUGELLO – Dr. Piero Mazzinghi of Vaglia makes some technical considerations about the use of hydrogen as a fuel for trains. And they are very critical and concerned considerations.

I would like to make some technical considerations on the proposal to transform the Faentina railway to hydrogen and, in general, on the use of hydrogen as an energy vector (let’s remember that it must be produced, there are no hydrogen mines…).

Currently almost all hydrogen is produced from hydrocarbons, by steam reforming methane or by gasification of coal with the Haber-Bosch process. The efficiency of both processes is around 70%. Hydrogen then, given its low density, to be used must be compressed at high pressure (at 700 atmospheres) or liquefied (at -252 °C), losing at least another 30% of energy. To power electric motors it must then be fed into fuel cells, which have an efficiency of around 50%. Now, a simple multiplication (0.7×0.7×0.25= 0.245) shows that the cycle efficiency is less than 25%, compared to an efficiency of a modern diesel engine ranging from 40 to 50%…