Home » Economics » The Perfect Storm Is Bearing Down

The Perfect Storm Is Bearing Down 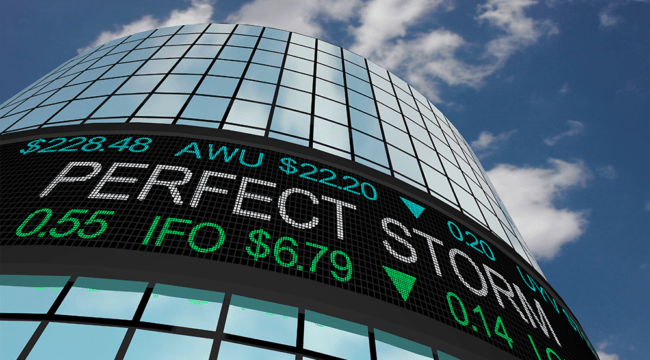 The Perfect Storm Is Bearing Down

Time, the saying goes, is nature’s way of making sure that everything doesn’t happen at once. So now, maybe, we’re at the event horizon where nature is suspended because everything seems to be happening at once.

The weeks ahead could determine whether we are a coherent society that can function on the basis of a firm consensual reality or just a collection of battling narratives designed to conceal anything that quacks like truth, all veering toward failure.

This is a very nervous country, and for a good reason. The collective sense of reality has commenced a momentous shift, the compass is spinning wildly, things are shaking loose in the national brain-pan, the gaslight has lost its sheen and the once-solid narrative is turning to vapor, starting with the unspooling riddles of COVID-19.

The COVID-19 engineered bioweapon is being used internationally to suppress formerly free citizens of formerly democratic republics. It becomes more obvious each day that everything connected to this extravaganza is other than it appears to be.

The numbers don’t add up, starting with the fact that when you combine the official registered COVID cases (people with acquired natural immunity) with the people who already had some kind of immunity from previous lifelong coronavirus encounters with the number of people vaccinated, you have a population supposedly way beyond herd immunity.

Who’s getting sick now? Mostly people who are all vaxxed up.

Contrary to the behavior and statements of public health officials and politicians, the news is out that the spike proteins produced by the vax’s mRNA genetic reprogramming are toxic agents that create disorder in the major organs and blood vessels.