Home » Energy » More Myths – This Time With Some Reality

More Myths – This Time With Some Reality

More Myths – This Time With Some Reality 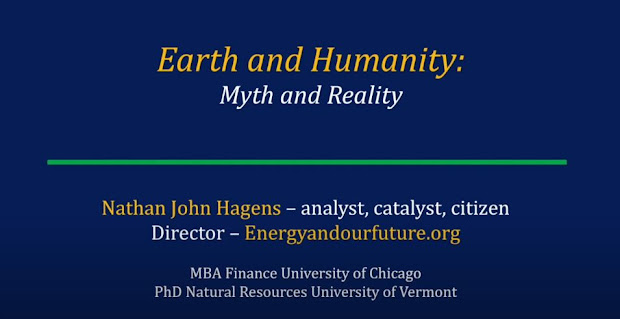 Nate Hagens recently produced a new video here regarding myths and reality and it is very well done. The video goes into precise detail about many core myths and beliefs, and I have the video queued up to the part about the myth of “technology solving it” for anyone who still thinks solar panels and wind turbines help reduce emissions in any way (spoiler alert; they actually INCREASE emissions). Once you’ve seen this part, I recommend going to the beginning and watching the entire video from the start.

The entire video is excellent with regard to eliminating commonly held false beliefs generally encouraged by industry and governments in an effort to continue BAU (Business As Usual) and industrial civilization as long as possible.

I actually wrote out a detailed critique of the video in the groups I manage, but think that this video deserves a much wider audience, which is why I wrote this post. The video is excellent in explaining why technology can not and will not save us nor will it solve climate change, and it correctly dispels the overwhelming nonsense (such as “green” or “clean” or “renewable” energy, net-zero PR marketing, EVs and other transportation ideas based on electric motors, “smart” grids, etc.) which is constantly hyped about climate change, ecological overshoot, and energy and resource decline.

The Myth #1 that Nate has listed; the “We Are Doomed” one actually ISN’T a myth. This is an existential FACT. ALL species go extinct sooner or later and we are no exception to this rule. So, from this angle, Hagens is simply suffering from denial of reality (no big surprise there, as MOST of society is suffering from this as well; and increasingly so).