Exactly at the worst possible time. Ripple effects to be felt for months.

Today is Thursday, and the Suez Canal is still blocked by one of the largest container carriers in the world. The last thing the tangled up and strained supply chains needed amid a historic surge in demand for durable goods, and component shortages that have led to numerous shutdowns of assembly plants, was a traffic jam at both ends of one of the world’s most important shipping choke points.  But that’s what manufacturers were served up when the Ever Given got stuck in a narrow part of the Suez Canal where about 30% of the world’s ocean container volume transits. Image by Airbus Space, this morning: 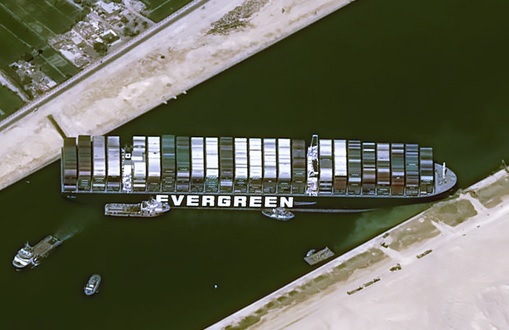 The Ever Given in all its beauty. Owned by Japan’s Shoei Kisen, operated by Taiwan-based Evergreen Group, and registered in Panama, it has a capacity of 20,000 TEU or Twenty-foot Equivalent Units.

On Tuesday at around 7:45 a.m. local time (Monday night in the US), the Ever Given got stuck in high winds, sailing northbound through the Suez Canal on its way from China to Rotterdam. And it is still stuck, despite all-out efforts to refloat the ship, blocking traffic in both directions. The estimates as when it could be moved out of the way range all over the place, from days to weeks, and might have to include partially unloading the ship.

About 19,300 vessels passed through the Suez Canal in the fiscal year 2020, or roughly 52 per day, according to the Suez Canal Authority. And they’re now piling up at both ends of the canal, and are stuck in the Great Bitter Lake in the middle.

← Congress, in a Five-Hour Hearing, Demands Tech CEOs Censor the Internet Even More Aggressively Phrasing the Question Right is the First Step to Find an Answer. How to Prevent Nuclear War →