About ten days ago, we penned a weather note to readers titled “”Early Spring, Winter Is Over?” – New Weather Models Suggest Warmer Weather Nears,” outlining how after a polar vortex split poured Arctic air into much of the US, wreaked havoc on power grids, but there was light at the end of the tunnel as the first half of March would expose much of the country to warmer weather trends.

Well, eight days into March and more than 100 million Americans across the Southwest, West Central, East Central, Southeast, Mid-Atlantic, and Northeast will experience warmer than average temperatures this week.

“The ridge of high pressure over the East will allow southerly winds to spread spring warmth northward and influence conditions for most areas east of the Rockies. Meanwhile, cooler than average temperatures will develop in the West, particularly in the Southwest,” according to The Weather Channel.

The mild setup for this week is a relief from last month. Highs could be 10 to 25 degrees above average in the East, except for Florida, by Tuesday. By Wednesday, most parts of the Northeast could be in the 60s.

Here are some of the forecasted temperature highs this week for major metro areas. By mid-late week, NYC could be averaging in the mid-60s.

“High temperatures will be 20 to 35 degrees above average from the Northern and Central Plains into the Great Lakes region through Wednesday. Highs in the 60s and 70s are anticipated with 50s toward the Canadian border. Temperatures near 80 are even possible in parts of the Central Plains,’ The Weather Channel said. 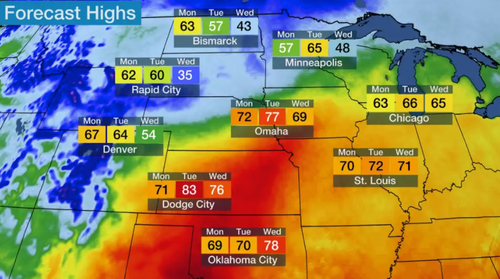 Temperature anomalies show the widespread warming that will affect more than 100 million people.

Could the US planting season begin earlier this year with warming trends?

The warmer weather is expected to last through Mar. 15, with slightly colder temperatures afterward. At this point, Americans will take any warm weather as the tail end of winter has been miserable.

← Too Busy Frontrunning Inflation, Nobody Sees the Deflationary Tsunami Massive Protest in Quebec Against Lockdowns over Weekend →