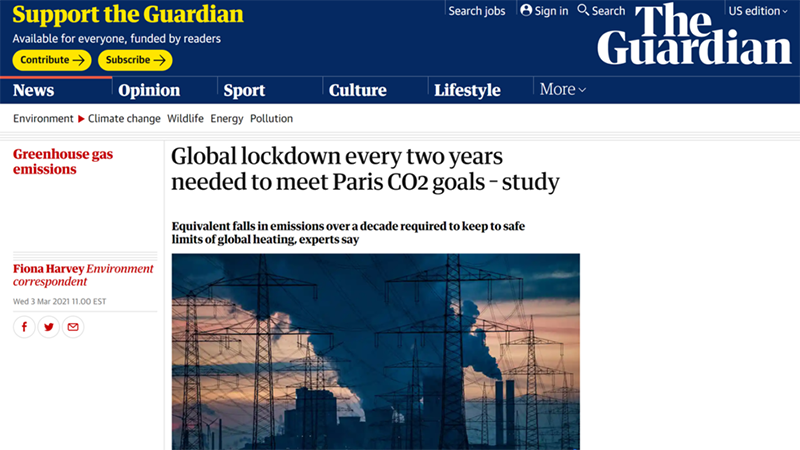 The London Guardian has suggested that global lockdowns will be needed every two years in order to save the planet.

The piece refers to study published in the Nature journal by a team of researchers at the University of East Anglia, who concluded that CO2 emissions need to drop by the same amount as they have during the recent lockdown period “roughly every two years” in order to offset global warming.

The study did not advocate global lockdowns in order to achieve this, despite the Guardian’s misleading headline. In fact it called for “completely different methods”.

The headline was changed to the slightly less fear mongering ‘Equivalent of Covid emissions drop needed every two years – study’ after a backlash ensued.

After many climate alarmists began touting the environmental virtues of lockdowns last year, we warned that climate lockdowns would become a thing:

The Guardian also has a history of over-hyping alarmist climate warnings, having previously reported that by 2020 we would be seeing  “millions” of deaths, major European cities being sunken, and nuclear war due to planetary warming.

The Newspaper’s alarmist call for lockdowns comes days after the World Economic Forum was slammed for praising the effects lockdowns have had on cities: