Home » Liberty » The lure of imperial dreams: What are our leaders going to do to us?

The lure of imperial dreams: What are our leaders going to do to us?

The lure of imperial dreams: What are our leaders going to do to us? 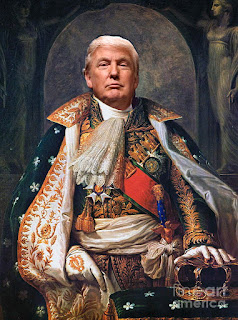 Donald Trump is often represented wearing some kind of imperial garb. Actually, his presidency may have been less imperial than that of his predecessors. Yet, his style as president is very much “imperial” and his winning slogan in the 2016 elections, “MAGA,” (make America great again) has a deep imperial ring to it. Earlier on, Benito Mussolini, the leader of the Italian government between the two world wars, was destroyed (and with him Italy and not just Italy) by his Imperial ambitions.

When things get tough, people seem to think that they need tough leaders and this is a clear trend in the world, nowadays. It is a deadly mechanism that tends to bring dangerous psychotic personalities to the top government positions. I already noted in a previous post how imperial ambitions coupled with incompetence (both common conditions in high-level leaders) can destroy entire countries.

Here, let me examine an interesting feature of how Benito Mussolini (1883 -1945) ruled Italy. Despite his warlike rhetoric, during the first phase of his government he pursued a moderate foreign policy, avoiding wars. Then, the second phase of his rule was characterized by a series of disastrous wars that led to the destruction of Italy (and not just of Italy) and to the downfall of Mussolini himself. Whether this story can tell us something about a possible second term for Donald Trump as president, is left to the readers to decide.

Benito Mussolini and the Italian Empire: How Leaders’ Absurd Decisions Lead to Collapse.

Benito Mussolini ruled Italy for 21 years after the “March on Rome” of 1922. Many things happened during those years but, on the whole, you could think of the Fascist rule as having two phases: one before and the other after the turning point that was the invasion of Ethiopia, in 1935.

← The Democrats are Indeed Looking for a Coup d’etat Tens Of Millions Of People Displaced By The ‘War On Terror’, The Greatest Scam Ever Invented →