‘War on Terror’ Has Left Millions Dead Across the Middle East

‘War on Terror’ Has Left Millions Dead Across the Middle East 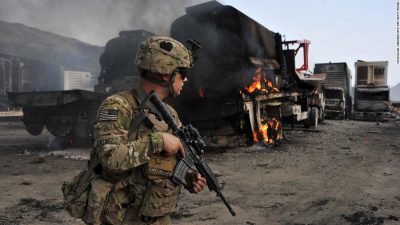 As research reveals of late, “counter-terrorism” operations led by the United States over many years have wrought increasing devastation. Not to mention, continuing and worsening repercussions.

A rough estimate of four million Muslims have died as a result of US-led wars in the Middle East – dating to the early 1990s Gulf War against Iraq. The Gulf War was waged by the US, with France, Britain and Saudi Arabia providing welcome support.

It was in response to Saddam Hussein’s invasion of Kuwait in early August 1990 – the Iraqi dictator having unwisely disobeyed orders from his Western masters. However, it was the Iraqi civilian population who would pay the real price, and not for the last time.

For 42 successive days and nights, US-led coalition forces subjected Iraq to one of the most destructive aerial assaults in military history. Over 88,000 tons of bombs were unloaded on Iraqi soil from mid-January 1991 to the end of February. Much of the bombing fell upon civilian areas.

Hussein’s attack on Kuwait the previous year had drawn “international condemnation”. The above bombardments, infinitely greater in destruction, were met with approval in some quarters and silence in others. By this point, Western governments had already placed “genocidal” sanctions on Iraq – an immediate response to Hussein’s occupation of Kuwait.

The sanctions lasted a staggering 13 years (1990-2003) and brought unaccountable suffering. The lack of basic needs particularly affected Iraqi children, with those aged under 14 comprising 45% of Iraq’s population. Such measures were still “worth it”, as declared infamously in 1996 by Madeleine Albright, former US Secretary of State.

← 2018 Was The Worst Year For The Stock Market Since The Financial Crisis Of 2008 U.S.’s Defeat in Syria is a Crisis of Empire →