The list of countries, states, cities and towns that have announced ambitious plans to go 100% renewable continues to grow. The latest entrant is Spain, which according to the Guardian plans to switch to 100% renewable electricity by 2050 and aims to fully decarbonize the country’s economy shortly after. Evaluating the full decarbonization option is beyond the scope of a blog post, so here I give Spain the routine Energy Matters treatment to see whether it has any chance of converting its electricity sector to 100% renewables by 2050.

A couple of observations to begin with. First, Spain’s plans are set forth in a draft Climate Change and Energy Transition Law that has yet to pass Congress. The recently installed Sánchez government has a shaky hold on power and will need support from other parties to make it official. But which politician these days can resist the magic catch-phrase “100% renewables”? Even Conservative MPs in the UK are now calling for it.

Second, the data presented here are for the Spanish “Peninsula” – i.e. mainland – only. The Balearic and Canary Islands are ignored.

The table below summarizes Spain’s generation capacity at the end of 2017. The data are from the Red Eléctrica de España (REE) Statistical data of electrical system report 2017: 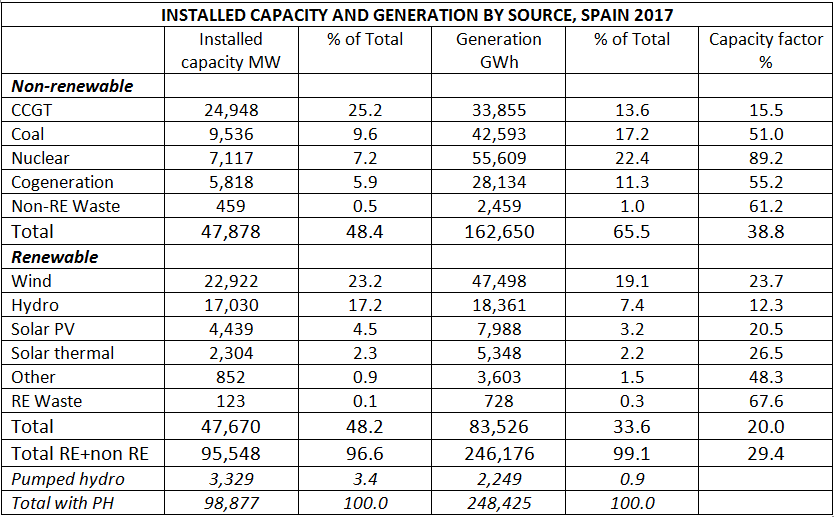 Segregating the results in accordance with these definitions shows that renewables supplied about a third of Spain’s electricity in 2017. It’s not clear whether distributed generation is included in REE’s numbers, but word searches for “distributed”, “embedded” and “rooftop” yielded zero hits.

← Scientists Want to Synthetically Create a Volcanic Winter – Are they Just Nuts? Bearish on Fake Fixes →