Home » Economics » What Will Rising Mortgage Rates Do to Housing Bubble 2?

What Will Rising Mortgage Rates Do to Housing Bubble 2?

The US government bond market has further soured this week, with Treasuries selling off across the spectrum. When bond prices fall, yields rise. For example, the two-year Treasury yield rose to 2.06% on Friday, the highest since September 2008.

In the chart, note the determined spike of 79 basis points since September 8, 2017. That was the month when the Fed announced the highly telegraphed details of its QE Unwind. 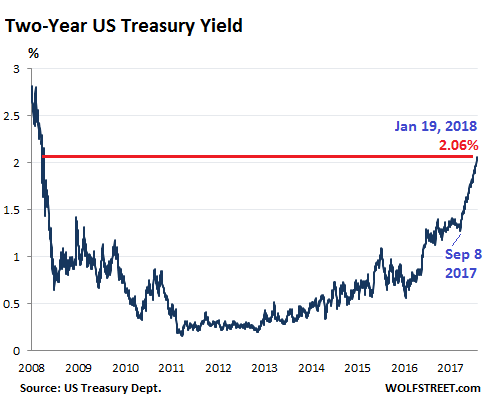 September as month of the QE-Unwind announcement keeps cropping up. All kinds of things began to happen, at first quietly, without drawing much attention. But then the trajectory just kept going. 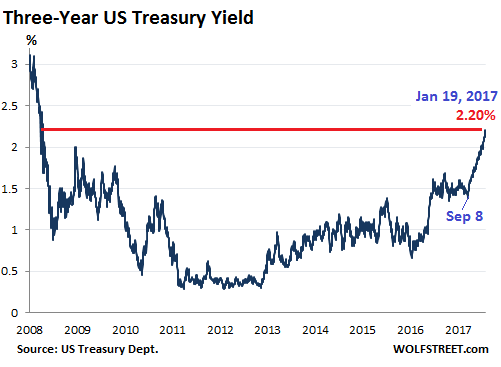 The ten-year yield – the benchmark for financial markets that most influences US mortgage rates – jumped to 2.66% late Friday.

This is particularly interesting because the 10-year yield had declined from March 2017 into August despite the Fed’s three rate hikes last year, and rising short-term yields.

At 2.66%, the 10-year yield has reached its highest level since April 2014, when the “Taper Tantrum” was winding down. That Taper Tantrum was the bond market’s way of saying “we’re shocked and appalled,” when Chairman Bernanke dropped hints the Fed might eventually begin tapering what the market had called “QE Infinity.” 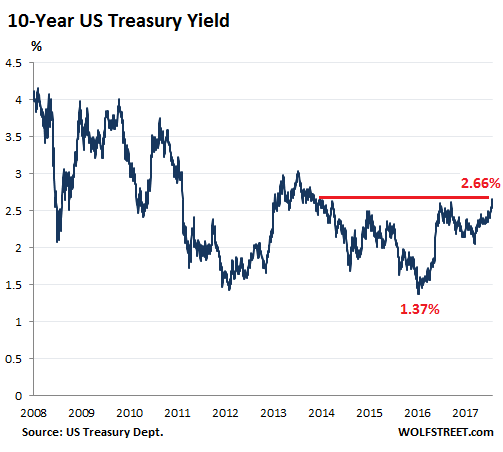