Lavishing Money on the Pentagon

Exclusive: It seems like it’s always Christmastime at the Pentagon where the stockings are full and budget-cutting is for those domestic social-program guys, as Jonathan Marshall explains.

Wise parents who celebrate Christmas advise their young children not to make unreasonably grandiose requests of Santa. After all, he has to squeeze down a rather narrow chimney to deliver their presents. 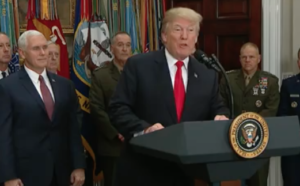 President Trump announces the signing of the National Defense Authorization Act of 2018 on Dec. 12, 2017, at the White House. (Screen shot from whitehouse.gov)

But as Christmas approaches this year, leaders of Congress, the Pentagon, and the Trump White House seem to have forgotten that lesson. Their wish list for the U.S. military, if taken seriously, will bust the federal budget at the very time Republicans are ramming through tax legislation that will shrink Uncle Sam’s savings account by more than a trillion dollars over the next decade.

In addition to lavish spending on new weapons — like $10 billion for purchases of the disastrous F-35 Joint Strike Fighter — this Christmas legislation for the military includes all sorts of smaller presents, including billions of dollars to fund NATO’s European Deterrence Initiative (whatever happened to Trump’s demand that our allies pay for their own defense?), missile defense systems of doubtful efficacy, and development of a new cruise missile that would violate the 1987 Intermediate-Range Nuclear Forces treaty with Russia.