A Shaky Promise on Global Warming

Paris was certainly 2015’s center for ticking bombs. The year was bracketed by major terrorist attacks in Paris – first in January (murders at Charlie Hebdo’s offices) and in November (shootings and bombings that killed 130 people at several locations) – and ended with a December environmental conference which, given its non-binding results, opens the door to even more terror, albeit of a different kind, into the next century and beyond.

The 21st Conference of Parties, or COP21, ended in Paris on Dec. 12. If you are not familiar with the name or acronym, it refers to the latest gathering of nations (195 of them) looking toward a collective decision to limit global warming by slowing the release of greenhouse gases. Following the conference closure there was a short spate of positive reactions that has now been followed by a rather ominous silence. 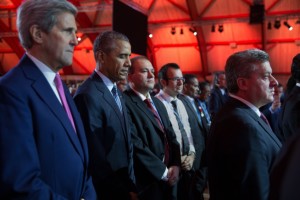 President Barack Obama, Secretary of State John Kerry and other heads of state and delegations, observe a minute of silence for the Paris attack victims during the opening ceremony of the 21st Conference of the Parties to the United Nations Framework Convention on Climate Change (COP21), in Paris, France, Nov. 30, 2015. (White House Photo by Pete Souza)

Until very recently there was a large number of people — mostly business people, lobbyists and politicians — who denied that human practices, such as the use of fossil fuels, had any significant impact on planetary warming, and some dismissed the idea of warming altogether. These numbers seem to have shrunk, and most of those still adhering to such notions are not often heard in public. This muted opposition helped pave the way for the at once limited and over-hyped result achieved at the Paris conference.