Climatologists unsure of outcome of battle of ‘Godzilla’ El Niño vs. the Pacific Blob

For many drought-weary Californians, it has become the ‘Great Wet Hope.’ Bill Patzert, a climatologist with NASA’s Jet Propulsion Laboratory in Pasadena, has given it a less enthusiastic nickname.

“This is the Godzilla El Niño,” Patzert says. “This potentially could be the El Niño of our generation.”

El Niño is the term for a massive patch of warm water that appears in the the Equatorial Pacific every few years, affecting weather patterns across the world. Typically, its appearance means more rain on the Pacific coast and a milder winter west of the Rockies.

“Places that are normally dry get extremely wet, and of course that would include the American west,” Patzert says. “So we’re kayaking down the street in Los Angeles, and they’re playing golf in February in Minneapolis.”

Climatologists suspected El Niño was coming. Now they’re predicting it’ll be even bigger than they thought. 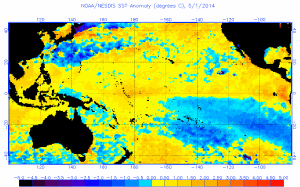 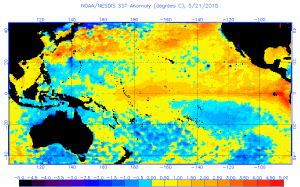 Sea surface temperature anomalies for May 2015. Warmer colours indicate warm temperatures, and are particularly noticeable around the equator and South America. (NOAA)

In 1997, a massive El Niño brought floods, mudslides and hurricanes. In California it killed 17 people and caused half a billion dollars of damage.