Arctic Blast Could Produce Next Snowmaker For Northeast

Arctic Blast Could Produce Next Snowmaker For Northeast

Freezing temperatures will return to the central and eastern regions of the US this week as an arctic front sweeps out the mild weather. This could result in the next snowmaker for parts of the mid-South and Northeast by Tuesday afternoon into Wednesday, reported The Weather Channel.

The jet stream will dive southward over the central and eastern states as a cold front slides through the Plains, Midwest, and into the East during the day. The frigid weather will first affect the Northern Plains and the upper Midwest on Tuesday. Highs will be around zero through mid-week for parts of Dakotas, Minnesota, Wisconsin, and Michigan.

Cold temperatures will impact the Northern Plains and Upper Midwest this week. The combination of arctic air and brisk winds could lead to dangerous wind chills.

The cold front will continue the march southward into the evening and overnight. Arctic air is expected to collide with moisture in the mid-South and Northeast by the afternoon into evening hours, which could change from rain to snow.

The change over could occur in rush hour for parts of central Arkansas to northern Mississippi, western and Middle Tennessee, southern Kentucky, and West Virginia.

Winter Storm Harper will become a major snowstorm from the Great Plains to the Midwest and Northeast Friday into the weekend, according to The Weather Channel.

A blast of Arctic air will return to the nation’s northern tier starting Thursday. 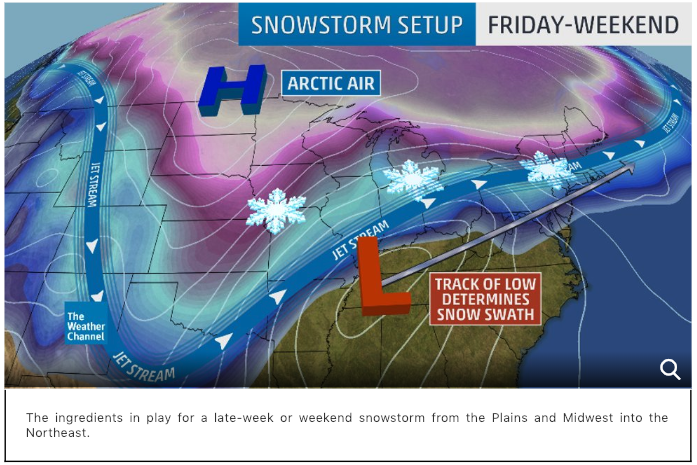 The storm system entered the West Coast Wednesday will collide into that frigid air once it reaches central and eastern states Friday through the weekend, delivering the possibility of Snowmageddon for parts of the Northeast.

Weather models are not sure on the exact trajectory of the system as it currently pivots through the central and eastern states.

On Thursday, Harper is set to bring snow into the Rockies, Sierras and Cascades, then push into the Northern Plains by evening. On Friday, snow will continue in the Rockies and Plains — leaving the possibility for blizzard conditions.

Late Friday, the lower Great Lakes, Kansas, parts of Oklahoma and the Texas Panhandle are expected to experience some form of wintery precipitation. Sleet and freezing rain are expected for northern Missouri and southern Illinois. 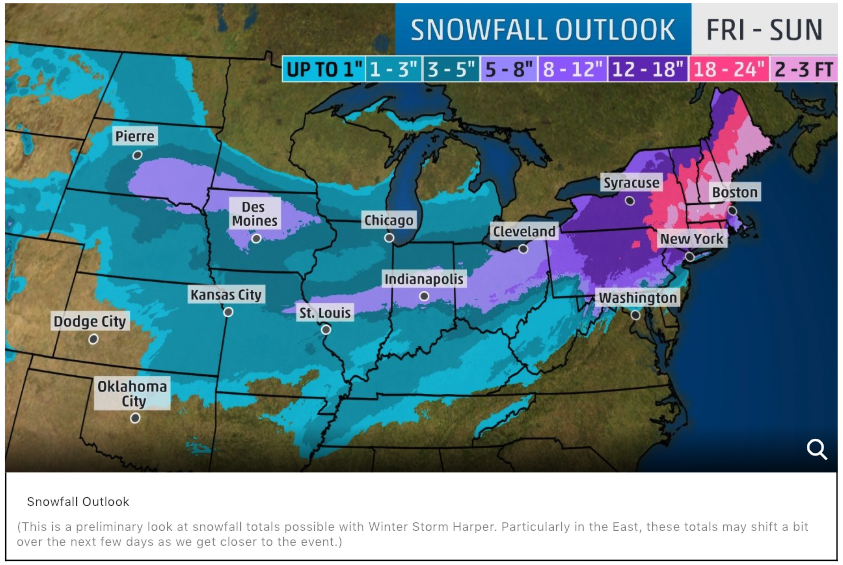 On Saturday, the big snow event is expected to start in the Northeast. Heavy snow will also continue in some regions of the Plains and Midwest, said The Weather Channel. 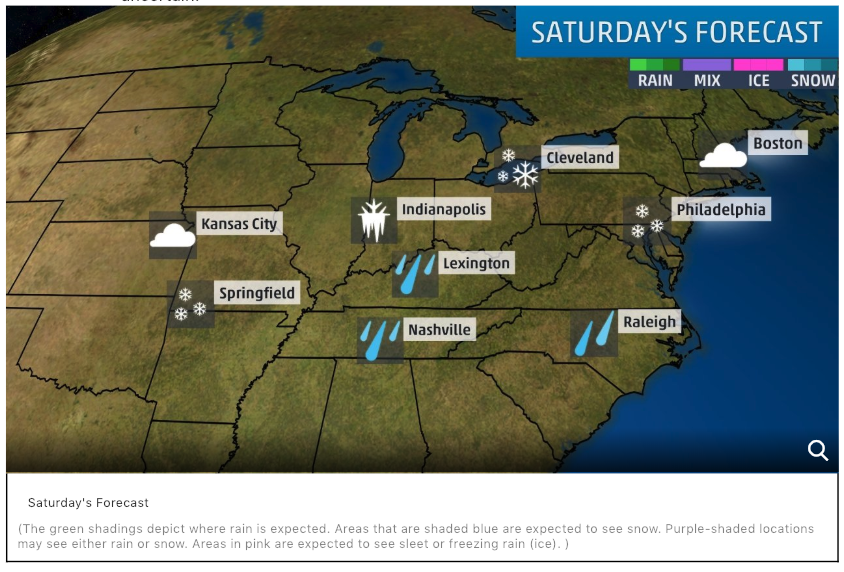 By Saturday evening, snow will blanket parts of New England, while a mix of wintery perception is expected in parts of the Ohio Valley, the mid-Atlantic, the lower Hudson Valley, and southern New England.

On Sunday, that is when Snowmageddon could strike New York State. The Weather Channel indicates that people should prepare for heavy snow in parts of northern Pennsylvania, New York state, and northern New England. 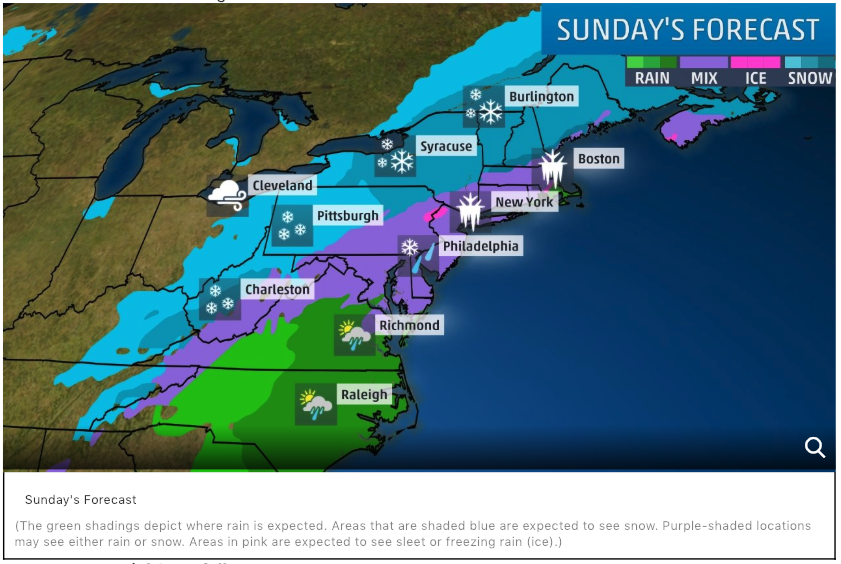 Already, the National Weather Service has issued a winter storm watch for western and north-central New York well before Harper’s arrival this weekend.

As of Thursday morning, it is too early to know the exact trajectory of the storm and snowfall totals, due to the unknown track of the low-pressure system and the rain/snow line. However, it certainly looks like a major snow event this weekend is an immient threat to the Northeast. 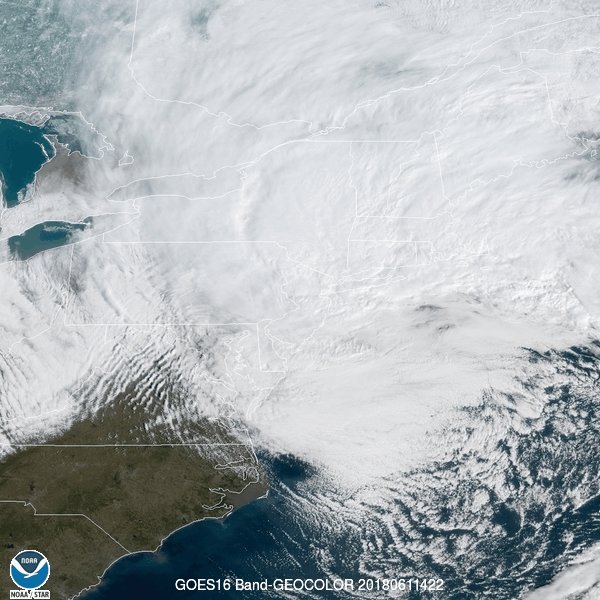 Spotted by @NOAASatellites‘ #GOES16 satellite: today’s #noreaster is seen spinning off the Atlantic Northeast. This storm is slamming the East Coast with intense winds, snow, rain and hail. More: https://www.star.nesdis.noaa.gov/GOES/GOES16_sector_band.php?sector=ne&band=GEOCOLOR&length=24 …

A 6-year-old boy died in Virginia after a tree fell on his family’s home, officials said. Others include an 11-year-old boy hit by a falling tree in New York state, a 57-year-old man in Upper Merion, Pennsylvania, hit by a tree while in his car and a 77-year-old woman struck by a branch outside her home in Baltimore.

The storm strengthened rapidly Friday, undergoing what’s known as bombogenesis or “bombing out,” when a low-pressure system drops 24 millibars in 24 hours. It was the second “bomb cyclone,” to hit the region after a similar storm hit the northeast back in early January. home in Baltimore.

According to Reuters, almost 2.4 million homes and businesses had no power in the Northeast and Midwest early on Saturday. Some utility companies warned customers that power might not be restored until later in the day or Sunday.

New York City saw a mix of rain, snow, sleet and winds that wrapped up by evening. Over 4 inches of rain fell in eastern Long Island and parts of eastern Massachusetts.