An appropriate European Union response to tensions in the Eastern Mediterranean

An appropriate European Union response to tensions in the Eastern Mediterranean

If the European Union can mediate effectively to resolve current Greek-Turkish tensions over energy in the Eastern Mediterranean, it could also provide an opportunity to tackle more deep-rooted problems.

The European Union is seeking to mediate in a naval confrontation on its doorstep, in the Eastern Mediterranean, which involves NATO partners Greece and Turkey, as well as EU member Cyprus. EU foreign ministers are discussing the issue and, without de-escalation, sanctions against Turkey could be implemented. But so far, the two most powerful EU nations have adopted a ‘good cop, bad cop’ approach that conveys different and confusing messages – and has not prevented escalation. Chancellor Angela Merkel, with the added authority of holding the EU’s six-month revolving presidency, has launched a German initiative to prevent escalation, reduce tensions and overcome longstanding conflicts. But French President Emmanuel Macron, while not eschewing mediation, has opted for a show of force, sending French naval vessels into disputed waters to counter the presence of Turkish warships.

The dispute is ostensibly over ownership of offshore gas deposits and the delimitation of 200-mile exclusive economic zones (EEZs).

Turkey has sent exploration vessels and warships into waters claimed by Greece and Cyprus and begun drilling for gas. Despite its 1,600 kilometre Mediterranean coastline, Turkey is the only Eastern Mediterranean state without internationally recognised rights to offshore resources in the area because nearby Greek islands and Cyprus have secured the right to generate EEZs under the United Nations Convention on the Law of the Sea (UNCLOS). Turkey is one of fifteen UN members that is not a party to UNCLOS, and Ankara insists that Turkey’s continental shelf gives it ownership rights that take priority over the UNCLOS-backed claims of Cyprus and Greece.

The years-long war for post-Gaddafi Libya now threatens to spill over into the Mediterranean as Turkey and Greece line up on either side of the conflict. Each side is now threatening the others’ allied ships in southern waters after a controversial maritime deal expanded Turkish claims off Libya’s coast.

On Thursday Benghazi-based General Kalifa Haftar declared his Libyan National Army has begun its “final decisive battle” to wrest control of the capital of Tripoli from the UN-backed Government of National Accord (GNA).

“Zero hour has come for the broad and total assault expected by every free and honest Libyan,” Haftar said in a televised address, reports Al Jazeera. “Today, we announce the decisive battle and the advancement towards the heart of the capital to set it free… advance now our heroes.” Beginning eight months ago Haftar launched a siege of Tripoli, which has been stalled in recent months.

Turkey has been the closest military supporter to Tripoli’s GNA, even recently signing a controversial maritime agreement, after providing heavy weaponry to repel Haftar’s assault. Last summer the LNA even attacked Turkish naval ships, in what’s an ongoing declared war with any Turkish vessel or aircraft. This “proxy war” element is now threatening to involve Greece.

Days ago Erdogan confirmed his country signed a bilateral memorandum, finalized on Nov. 27, which would allow Turkish forces to enter Libyan territory or waters at the request of the GNA authorities.

“With this new agreement between Turkey and Libya, we can hold joint exploration operations in these exclusive economic zones that we determined,” Erdogan said. The agreement established a continental shelf and Exclusive Economic Zone (EEZ) boundary line of 18.6 nautical miles between the two countries.

Late this week, the US State Department accused China of escalating its coercive actions against Vietnam in the South China Sea.

A spokesman said the US is “deeply concerned” China is continuing its interference with Vietnam’s longstanding oil and gas activities in the Vietnamese Exclusive Economic Zone (EEZ) claim.

“This calls into serious question China’s commitment, including in the ASEAN-China Declaration on the Conduct of Parties in the South China Sea, to the peaceful resolution of maritime disputes,” the statement said.

This week the National Interest described in detail the worsening situation in a piece aptly titled South China Sea Showdown: China vs. Vietnam (Round 2).

The Haiyang Dizhi 8, a survey vessel belonging to a Chinese government-run corporation, began surveying a large swath of seabed on 3 July northeast of Vanguard Bank, which falls within Vietnam’s exclusive economic zone. The ship has been escorted by other vessels, including from the China Coast Guard and maritime militia. At the same time, China Coast Guard ships have been harassing Vietnamese drilling operations to the south.

Western analysts see Beijing’s expansion in regional waters as part of a broader campaign of natural resource exploitation, with the ultimate goal of forcing rival countries into ‘joint exploration’ partnerships, even in undisputed waters.

According to the report, the current crisis is the most serious tensions have been between China and US ally Vietnam in years:

Chinese incursions into Vietnam’s EEZ are by no means a new phenomenon. The most serious recent incident occurred in 2014, when China deployed an oil rig into Vietnam’s EEZ, sparking a diplomatic crisis between the two neighbors. The current situation near Vanguard Bank, however, represents a more serious challenge on several levels.

The specter of a rumored U.S. military buildup in Cyprus that would draw a major Russian response now adds to the ongoing Greek Cypriot-Turkish conflict over the island and the oil and gas riches it promises.

Ever since the massive hydrocarbon discovery in Cyprus’ exclusive economic zone (EEZ) in 2011 by American company Noble Energy the island has been the center of a geopolitical game that doesn’t stop with rife tensions between Turkey and the Greek Cypriots.

And now this game is drawing nearer to its climax, with much at stake.

Cyprus–an island in the eastern part of the Mediterranean Sea—is divided into the Greek-dominated Republic of Cyprus in the south and the Turkish-controlled north. Since 2004, the Republic of Cyprus has been a member of the European Union, and the northern ‘entity’ remains recognized solely by Turkey.

But it is the EEZ—the exclusive economic zone—where this geopolitical game of chess is being played out. 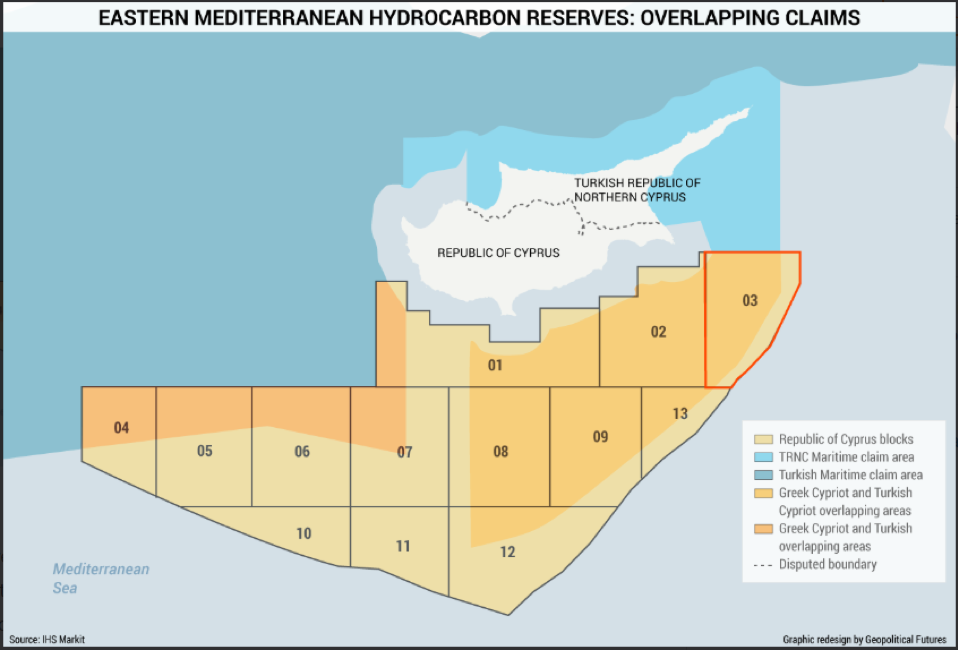 Generally, Turkey doesn’t accept the jurisdiction of Cyprus over the EEZ, and particularly the process of bidding on and awarding concession for offshore oil and gas drilling. Every attempt by Nicosia to invite international companies to explore offshore has been met with a strong reaction from Turkey, which is constantly looking for geopolitical leverage in this battle.

From the Turkish perspective, the Greek Cypriots persist “in ignoring the equal and inalienable rights and interests of the Turkish Cypriot side on natural resources of the island”.

Indeed, everything in correlation with oil and gas on Cyprus has a specific political weight and is highly sensitive.