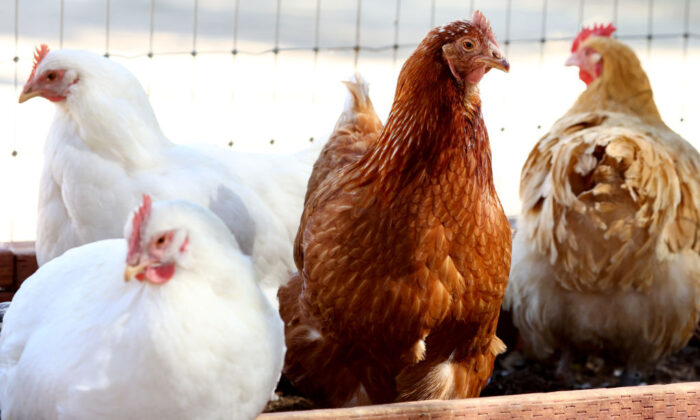 Rescued chickens gather in an aviary at Farm Sanctuary’s Southern California Sanctuary in Acton, Calif., on Oct. 5, 2022. A wave of the highly pathogenic H5N1 avian flu has now entered Southern California as the fall bird migration sets in, raising concerns for wild birds and poultry farms in the region. (Mario Tama/Getty Images)

HARRISBURG, Pennsylvania—The public’s pocketbooks have been hit hard by the skyrocketing cost of eggs in the last few months. Prices have doubled and, in some places, tripled over what they cost a year ago—if you can even find them in your local grocery store.

The average cost of a dozen eggs in the United States is over $4.25, more than twice what it was just a year ago. Options such as cage-free eggs or organic go for over $7. Inflation is a part of the reason, but the agriculture industry says the bigger cause is the outbreak of the avian flu here in the United States a year ago; nationwide, it has affected nearly 60 million birds—nearly 5 million of them here in Pennsylvania.

American consumers love their eggs. The food staple is highly regarded by every walk of life for its simplicity and accessibility; for some families, it is their major source of protein. For others, it is the most important ingredient in baking and the central element in preparing casseroles, pasta, and numerous other dishes.

For many of us, it is hard to make a meal without an egg, so of course consumers are deeply affected by this. However, there is another side of that story that we are not examining. That is the equally devastating economic impact this is having on American poultry farmers and all of those who work with them. Their lives, livelihoods, and family legacies have been upended and even destroyed by the avian flu, a worldwide outbreak that shows no signs of subsiding.

← Wick Watering: Simple and Efficient Want to Know Where the Economy Is Going? Watch The Top 10% →