By olduvai in Geopolitics, Liberty on November 7, 2022.

An Australian university has unearthed millions of Tweets by fake ‘bot’ accounts pushing disinformation on the Ukraine war. 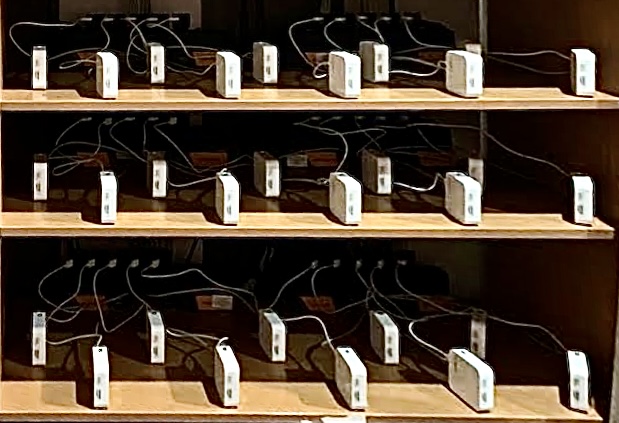 ‘Bot armies’ are on the march in the Ukraine-Russia war, with automated ‘bot’ accounts sending up to 80% of tweets in the study sample size of over 5-million tweets, with anti-Russia accounts comprising 90.2% of all accounts. Here, shelves of confiscated GSM gateways, containing hundreds of sim cards using the mobile network to create thousands of fake bot accounts to distribute millions of fake tweets. (Photo: Ukraine Security Service, SBU)

Ateam of researchers at the University of Adelaide have found that as many as 80 percent of tweets about the 2022 Russia-Ukraine invasion in its early weeks were part of a covert propaganda campaign originating from automated fake ‘bot’ accounts.

An anti-Russia propaganda campaign originating from a ‘bot army’ of fake automated Twitter accounts flooded the internet at the start of the war. The research shows of the more than 5-million tweets studied, 90.2 percent of all tweets (both bot and non-bot) came from accounts that were pro-Ukraine, with fewer than 7 percent of the accounts being classed as pro-Russian.

The university researchers also found these automated tweets had been purposely used to drive up fear amongst people targeted by them, boosting a high level of statistically measurable ‘angst’ in the online discourse.

The research team analysed a massively unprecedented 5,203,746 tweets, sent with key hashtags, in the first two weeks of the Russian invasion of Ukraine from 24 February this year. The researchers considered predominately English-language accounts, with a calculated 1.8-million unique Twitter accounts in the dataset posting at least one English-language tweet.

The results were published in August in a research paper, titled “#IStandWithPutin versus #IStandWithUkraine: The interaction of bots and humans in discussion of the Russia/Ukraine war“, by the University of Adelaide’s School of Mathematical Science.

← US NatGas Futures Jump As Frigid Weather Set To Swoop Across Country Energy’s role in economic production is severely underestimated! →