Home » Environment » Was the fall of the Roman Empire due to plagues & climate change?

Was the fall of the Roman Empire due to plagues & climate change?

By olduvai in Environment, Survival on August 4, 2021.

Was the fall of the Roman Empire due to plagues & climate change? 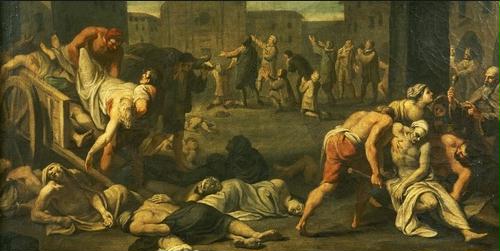 Preface. Harper (2017) shows the brutal effects of plagues and climate change on the Roman Empire. McConnell (2020) proposes that a huge volcanic eruption in Alaska was a factor in bringing the Roman Empire  and Cleopatra’s Egypt down.

In addition, there are other ecological reasons for collapse not mentioned in this book, such as deforestation (A Forest Journey: The Story of Wood and Civilization by John Perlin, topsoil erosion (Dirt: The Erosion of Civilizations by David Montgomery), and barbarian invasions (“The Fall of Rome: And the End of Civilization” and “Empires and Barbarians: the fall of Rome and the birth of Europe”.

McConnell JR et al (2020) Extreme climate after massive eruption of Alaska’s Okmok volcano in 43 BCE and effects on the late Roman Republic and Ptolemaic Kingdom.  Proceedings of the National Academy of Sciences.

Caesar’s assassination happened at a time of unusually cold wet weather, as much as 13.3 F cooler than today, and up to 400% more rain, drenching farmland and causing crop failures leading to food shortages and disease.  In Egypt the annual Nile flood that agriculture depended on failed. Although an eruption of Mount Etna in Sicily in 44 BC has been blamed, this paper found evidence that it may have been the eruption of the Okmok volcano in Alaska that altered the climate enough to weaken the Roman and Egyptian states. It was one of the largest in the past few thousand years (Kornei K (2020) Ancient Rome Was Teetering. Then a Volcano Erupted 6,000 Miles Away. Scientists have linked historical political instability to a number of volcanic events. New York Times).

A more nuanced and critical look at this scientific paper can be found here: Middleton G (2020) Did a volcanic eruption in Alaska help end the Roman republic? The Conversation.

← Descending Into Madness Hubs of Resilience →