Every year and following the publication of the BP Statistical Review, Rystad Energy releases its own assessment to provide an independent, solid and clear comparison of how the world’s energy landscape changed last year. Our 2021 review deals a major blow for the size of the world’s remaining recoverable oil resources – but it also shows that oil production and consumption can align with climate goals.

Rystad Energy now estimates total recoverable oil resources at 1,725 billion barrels, a significant reduction of last year’s estimate of 1,903 billion barrels. Out of this total, which shows our estimate of how much oil is technically recoverable in the future, about 1,300 billion barrels are sufficiently profitable to be produced before the year 2100 at a Brent real oil price of $50 per barrel.

“In this scenario, global production of oil and natural gas liquids will fall below 50 million barrels per day by 2050. Exploring, developing, processing and consuming this amount of commercially extractable oil will lead to gross greenhouse gas emissions of less than 450 gigatonnes of CO2 from now until 2100. This is compliant with IPCC’s carbon budget for global warming limited to 1.8?C by 2100,” says Rystad Energy’s Head of Analysis, Per Magnus Nysveen. 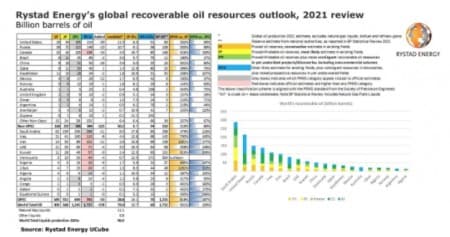 US and China take the largest hit by the revision:

This year’s review of global recoverable oil resources is based on resources modelled at well level rather than field level. This more detailed approach has removed 178 billion barrels from the expected accounts as the confidence level for decline rates has increased with the amount of new information gathered.

Our updated report also includes revisions for proved reserves. Here Rystad Energy applies a consistent set of conservative probabilities, as opposed to official reporting by authorities which is deemed less consistent. Among other findings, we see significant differences among OPEC members on the longevity of proved reserves, ranging from well below 10 years for some members to almost 20 years for Saudi Arabia and the UAE.