Home » Liberty » Who is the Emperor of the World? The New Age of Epistemic Dominance

Who is the Emperor of the World? The New Age of Epistemic Dominance

Who is the Emperor of the World? The New Age of Epistemic Dominance 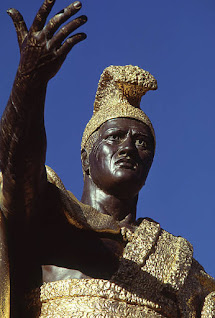 King Kamehameha 1st of Hawai’i (1736 – 1819) practiced the art of gift-giving during his reign, as it is typical of kings and rulers. It is remembered  that he said, “E ‘oni wale no ‘oukou i ku’u pono ‘a’ole e pau.” “Endless is the good that I have given to you to enjoy.” In our times Google seems to have taken the same attitude: it gives us gifts in the form of free data. In view of the concept of “epistemic coup” proposed by Shoshana Zuboff, Google is rapidly becoming the Epistemic Emperor of the world.

In Roman times, it was a good thing to be the Emperor: you had gold, palaces, women, slaves, and lots of privileges, including the power to put anyone to death. Emperors were supposed to be semi-divine creatures, enthroned by the Gods themselves but, in practice, they would soon become balding old men (if they survived to old age, not easy given the competition). So, why would anyone obey them?

Not a difficult question to answer. The Roman Emperors practiced a game that all rulers practice. It is called “gift-giving.” It is part of the concept of sharing: something deeply embedded in the nature of human beings, ultimately a manifestation of empathy among humans.

Sharing naturally creates social bonds that generate the hierarchical patterns that allow society to structure itself. In a harmonious society, the leaders govern without the need for force. They rule by their prestige, in turn obtained by judicious use of gift-giving to develop social bonds. Of course, societies are never perfect and, in the real world, governance is a combination of positive and negative enhancements: the carrot and the stick. But the carrot is way more effective than the stick: for a leader, a live follower is much more useful than a dead enemy.

← Still More Green Hypocrisy In the EU, This Time Hydrogen The Blind Leading the Clueless →