Home » Economics » It Gets Ugly: Dollar’s Purchasing Power Plunged at Fastest Pace since 1982. It’s “Permanent” not “Temporary,” Won’t Bounce Back

It Gets Ugly: Dollar’s Purchasing Power Plunged at Fastest Pace since 1982. It’s “Permanent” not “Temporary,” Won’t Bounce Back

The Consumer Price Index jumped 0.6% in May, after having jumped 0.8% in April, and 0.6% in March – all three the steepest month-to-month jumps since 2009, according to the Bureau of Labor Statistics today. For the three months combined, CPI has jumped by 2.0%, or by an “annualized” pace of 8.1%. This current three-month pace of inflation as measured by CPI has nothing to do with the now infamous “Base Effect,” which I discussed in early April in preparation for these crazy times; the Base Effect applies only to year-over-year comparisons.

On a year-over-year basis, including the Base Effect, but also including the low readings last fall which reduce the 12-month rate, CPI rose 5.0%, the largest year-over year increase since 2008.

In terms of the politically incorrect way of calling consumer price inflation: The purchasing power of the consumer dollar – everything denominated in dollars for consumers, including their labor – has dropped by 0.8% in May, according to the BLS, and by 2.4% over the past three months, the biggest three-month plunge in purchasing power since 1982: 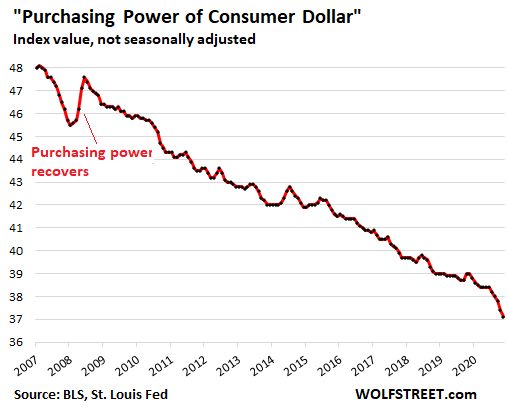 On an annualized basis, the three-month drop in purchasing power amounted to a drop of 9.5%, and this eliminates the Base Effect which only applies to year-over-year comparisons.

That plunge in purchasing power is “permanent” not “temporary.”

The only thing that might make a small portion of it “temporary” is if there is a period of consumer price deflation, which has happened for only a few quarters in my entire life, for example in the last few months of 2008, which is indicated in the chart above. So I’m not getting my hopes up.

← Chris Hedges: Assange & the Collapse of the Rule of Law Eight Pre-Hurricane Season Preparations You Need To Make →