Big Oil Is In Desperate Need Of New Discoveries

Big Oil Is In Desperate Need Of New Discoveries

The year 2020 was a watershed moment for the fossil fuel sector. Faced with a global pandemic, severe demand shocks and a shift towards renewable energy, experts warned that nearly $900 billion worth of reserves–or about one-third of the value of big oil and gas companies–were at risk of becoming worthless.

Even Big Oil mostly appeared resigned to its fate, with Royal Dutch Shell (NYSE:RDS.A) CEO Ben van Beurden declaring that we had already hit peak oil demand while BP Plc. (NYSE:BP)—a company that doubled down on its aggressive drilling right after the historic 2015 UN Climate Change Agreement--finally gave in saying “..concerns about carbon emissions and climate change mean that it is increasingly unlikely that the world’s reserves of oil will ever be exhausted.” BP went on to announce one of the largest asset writedowns of any oil major after slashing up to $17.5 billion off the value of its assets and conceded that it “expects the pandemic to hasten the shift away from fossil fuels.”

Yet, an ironic twist of fate might mean that rather than huge oil and gas reserves remaining buried deep in the ground, the world could very well run out those commodities in our lifetimes.

Norway-based energy consultancy Rystad Energy has warned that Big Oil could see its proven reserves run out in less than 15 years, thanks to produced volumes not being fully replaced with new discoveries.

According to Rystad, proven oil and gas reserves by the so-called Big Oil companies, namely ExxonMobil (NYSE:XOM), BP Plc., Shell, Chevron (NYSE:CVX), Total ( NYSE:TOT), and Eni S.p.A are falling, as produced volumes are not being fully replaced with new discoveries. 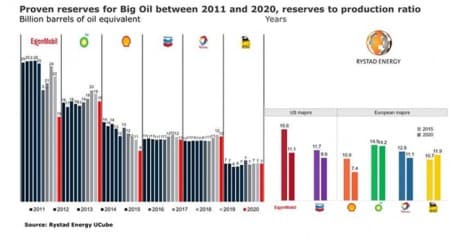