Home » Economics » Bank of Canada Now Owns 40% of Government of Canada Bonds. Fed a Saint in Comparison. Taper on the Table

Bank of Canada Now Owns 40% of Government of Canada Bonds. Fed a Saint in Comparison. Taper on the Table

“Makes you wonder if there’s a potential mid-QE-life crisis taking shape in Ottawa”: strategists at the National Bank of Canada in a note that would be hilarious if it weren’t so serious.

The Economics and Strategy shop at the National Bank of Canada, the country’s sixth largest bank, sent a missive to clients today that would be hilarious if it weren’t pointing at such a serious and massive issue: It celebrated “40,” referencing a 40th birthday, but instead of a birthday, it referred to the Bank of Canada’s ballooning holdings of Government of Canada (GoC) bonds, which will hit a stunning 40% of all GoC bonds outstanding this Friday.

The Bank of Canada announced a couple of weeks ago, citing “moral hazard” associated with its central bank nuttiness, that it would unwind its crisis liquidity facilities, and that this would reduce its total assets by about C$100 billion, or by about 17%, from C$575 billion at the time, to C$475 billion by the end of April. In October, it had started a mini-tapering of its purchases of GoC bonds and is jabbering about tapering its GoC bond purchases further. And its total assets have started to drop over the past two weeks: 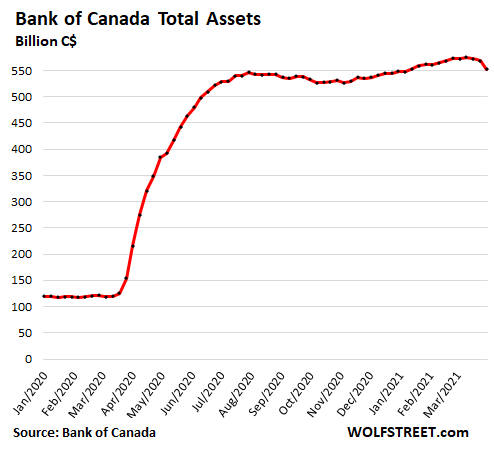