Home » Energy » Demand for Gasoline, Jet Fuel, and Diesel: Checking on the Recovery

Demand for Gasoline, Jet Fuel, and Diesel: Checking on the Recovery

Watching for the EV drag on gasoline demand requires a lot of patience.

Gasoline consumption in the US during the four-week period through February 5 was down by 10.1% from a year ago to 7.89 million barrels per day (mb/d), according to EIA data. Gasoline consumption has been down in the range between 9% and 13% since mid-July, following the initial bounce-back from the collapse in March and April: 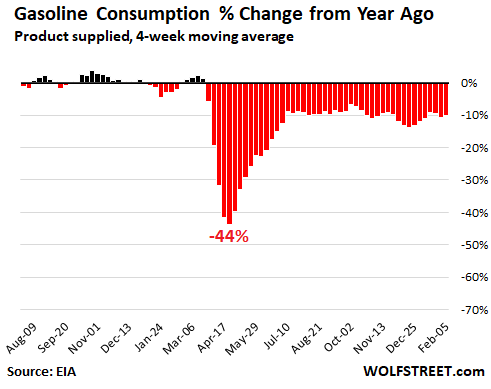 That Pandemic level of gasoline consumption below 8 mb/d was something that last occurred during the 1990s.

The effects of the pandemic – massive unemployment and working from home, partially balanced by driving instead of taking mass-transit and flying – are short-term factors that have hit gasoline demand, though they too may entail long-term shifts.

But there are also long-term structural demand issues: Peak consumption just before the Pandemic was just barely above the peak before the Financial Crisis 12 years earlier, with a big trough in between: 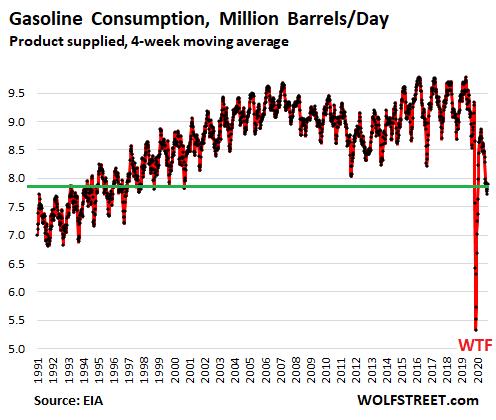 The EIA tracks consumption of fuel in terms of product supplied by refineries, blenders, etc., and not by retail sales at gas stations. 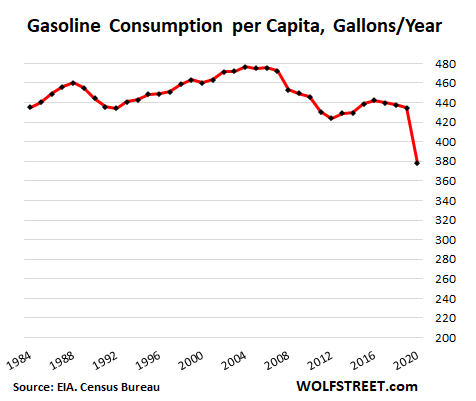 Watching for the EV drag on gasoline demand. Not yet visible.

← A World that Operates by Financial Cheating and Unsound Money Is Doomed Degrowing for peace? Tackling structural violence and climate resilience →