Home » Liberty » Politics in the Age of the Coronavirus. What can we learn from the Italian Elections?

Politics in the Age of the Coronavirus. What can we learn from the Italian Elections?

Politics in the Age of the Coronavirus. What can we learn from the Italian Elections? 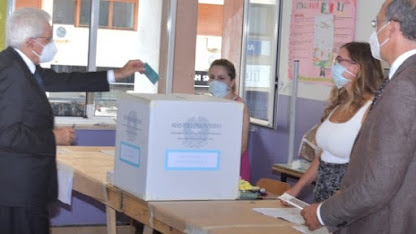 Sep 20, 2020. The president of Italy, Sergio Mattarella, votes at the Italian regional elections. In these elections, the first in the age of the COVID, the victory went to the Left largely by means of over a better strategy in managing people’s perceptions of the epidemic. Here, I report some personal considerations on how this result may tell us something about the coming US presidential election.

The regional elections of this weekend in Italy were held after a debate still dominated by the COVID epidemics. Although the virus itself was not mentioned so much in the speeches and in the political programs, the rest of the debate was shallow and lacking ideas on both sides. The Left was unable to propose anything better than “restarting growth,” and the Right little more than vague talks of “Italexit.”

So, the COVID epidemic hovered like a ghost over everything that was said and done. The Left coalition, the parties supporting the current government, had placed their bets on appearing tough on the epidemic. The government-controlled media tried to reinforce this perception by doing their best to terrorize citizens with daily catastrophistic reports. This strategy had a risk: if the elderly were to stay at home for fear of being infected at the polling station, then a disaster was looming for those parties that relied on their vote: in particular the Democratic Party (the former communists).

The Right, instead, never found a coherent strategy on the epidemic. Sometimes, it tried to convince its electorate that the epidemic was brought to Italy by black immigrants from Africa, but that worked only on people already convinced that all evils in Italy arrive from Africa.

← Hyperinflation, Fascism and War: How the New World Order May Be Defeated Once More Seven Countries In Five Years: Notes From The Edge Of The Narrative Matrix →