“In the middle of the journey of our life, I came to / Myself in a dark wood, for the straight way was lost.”
Dante, Inferno.

“Zoom is now worth more than IBM.”
“I don’t know if that says more about Zoom or IBM.”
Tweets by Morgan Housel (@morganhousel), 31st August 2020.

By the mid 1970s, film director William Friedkin was on a roll. 1971’s The French Connection bagged him an Oscar and widespread critical acclaim; 1973’s The Exorcist became the highest grossing Warner Bros film of all time. How did Friedkin follow up on all this monstrous success ? He decided to adapt Georges Arnaud’s novel The Wages of Fear (Le Salaire de la peur), in which down-on-their-luck truck drivers in Latin America attempt to ferry nitroglycerine across a treacherous mountain range in order to extinguish an oil well fire. The resultant 1977 release was called Sorcerer. It sank more or less with all hands.

Which is a shame, because Sorcerer – or Wages of Fear as it was somewhat unimaginatively titled in the UK (see poster below) – has moments that are pure cinema. The sequence where Roy Scheider and Francisco Rabal pilot their ramshackle truck over a threadbare rope bridge across a river in flood is one of the most extraordinary in film history (and very Werner Herzog). All of which vindicates screenwriter William Goldman’s assessment that in the movie business, nobody knows anything. 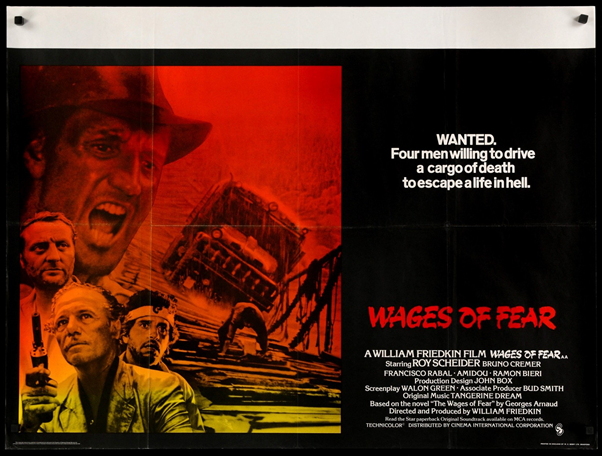 ← The Assange Trial, And Other Notes From The Edge Of The Narrative Matrix Iran Says It Chased Off US Spy Plane During Large-Scale Hormuz Exercises →