Home » Economics » As the Bubble Slowly Pops, the Economic Chain Reaction Is Now in Progress

As the Bubble Slowly Pops, the Economic Chain Reaction Is Now in Progress

As the Bubble Slowly Pops, the Economic Chain Reaction Is Now in Progress 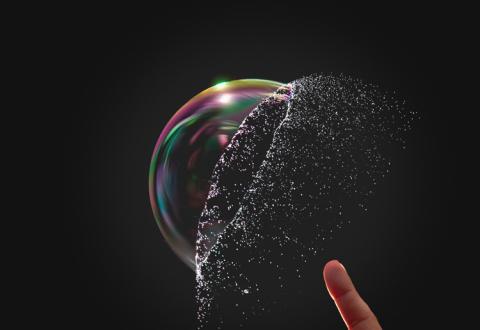 Much has been written about the economic consequences of covid-19, yet, just as in many of the analyses of the Great Depression and the 2008 crisis, the years of accumulating debt preceding the event do not attract the attention they deserve. Covid-19—or to be more precise, the lockdown—has initiated a cascading liquidation of the debt bubble that has been building for a generation. From the early 1980s, each recession has been responded to with iteratively lower interest rates. Following the bursting of the late 1980s credit bubble, Greenspan inaugurated the loosest monetary policy for a generation, creating the dotcom bubble. When this burst in 2000, it was responded to with even lower interest rates, reaching 1 percent from 2003–04, generating the housing bubble. When this burst in 2007/8, the response was 0 percent interest rates, turning a $150 trillion global debt bubble as it was then—already the largest In history—into a $250 trillion global debt bubble.

When central banks set interest rates it fundamentally distorts the pricing mechanisms of credit markets, just like price setting in other parts of the economy. Friedrich von Hayek won the Nobel Prize in 1974 for articulating that interest rates, like other prices, should be set by the market rather than central planning committees. We are not surprised when the government setting the price of food in Venezuela leads to food shortages, so we should not be surprised that 0 percent interest rates leads to a shortage in yield for investors, leading to a $250 trillion global debt bubble.

(Below is a speech I gave in the European Parliament in 2018 in which I adumbrated these points for a political audience):

← Gaia, the Return of the Earth Goddess Panic in Real Estate →