Home » Economics » The Eurozone Is in a Danger Zone

The Eurozone Is in a Danger Zone

The Eurozone Is in a Danger Zone 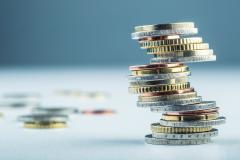 It is easy to conclude the EU, and the Eurozone in particular, is a financial and systemic time-bomb waiting to happen. Most commentary has focused on problems that are routinely patched over, such as Greece, Italy, or the impending rescue of Deutsche Bank. This is a mistake. The European Central Bank and the EU machine are adept in dealing with issues of this sort, mostly by brazening them out, while buying everything off. As Mario Draghi famously said, “whatever it takes.”

There is a precondition for this legerdemain to work. Money must continue to flow into the financial system faster than the demand for it expands, because the maintenance of asset values is the key. And the ECB has done just that, with negative deposit rates and its €2.5 trillion asset purchase program. But that program ends this month, making it the likely turning point, whereby it all starts to go wrong.

Most of the ECB’s money has been spent on government bonds for a secondary reason, and that is to ensure Eurozone governments remain in the euro system. Profligate politicians in the Mediterranean nations are soon disabused of their desires to return to their old currencies. Just imagine the interest rates the Italians would have to pay in lira on their €2.85 trillion of government debt, given a private sector GDP tax base of only €840 billion, just one third of that government debt.

It never takes newly-elected Italian politicians long to understand why they must remain in the euro system, and that the ECB will guarantee to keep interest rates significantly lower than they would otherwise be. Yet the ECB is now giving up its asset purchases, so won’t be buying Italian debt or any other for that matter. The rigging of the Eurozone’s sovereign debt market is at a turning point.

← Preparation is Vital. 2019 is Destined for Chaos The Fed, China, And The Markets →