California’s deadliest fire in state history has generated so much smoke that it’s blotting out the sun – which has caused surface temperatures to drop by as much as 10 degrees Farenheit, according to the US National Weather Service.

The smoke from the Camp Fire, which has burned 140,000 acres, claimed at least 56 lives, and is 40% contained, is so bad that anyone in the cities of Chico or Gridley who venture outdoors without a surgical-grade respirator are putting themselves in danger, according to Bloomberg.

Current air quality across much of the region is very poor. Check with https://t.co/XYTBpMFjzh and your local air quality board for more information. #CAwx pic.twitter.com/Rao8t4gvwD

The air in the immediate vicinity of the fire is considered “hazardous” — the worst it can be — and the poorest in the U.S. AirNow has an “unhealthy” rating for the air from Sacramento to Livermore, and it’s only a little better for San Francisco.

The smoke is so thick “it prevents the sunlight from reaching the surface,” said Hannah Chandler-Cooley, a National Weather Service meteorologist in Sacramento. “It prevents surface heating.” –Bloomberg 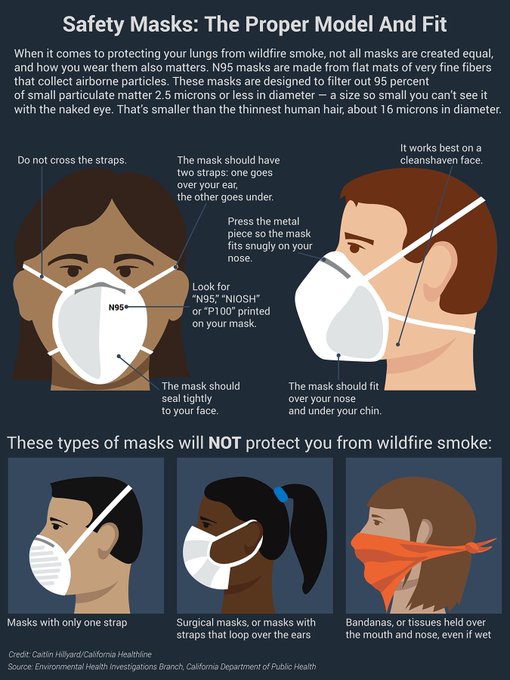 Will a surgical mask help protect you from #wildfire smoke? How about a bandana? Nope. You’ll need a special #N95 respirator mask – and you’lll need to wear it correctly: https://khn.org/news/for-wildfire-safety-only-particular-masks-guard-against-toxic-particulate-matter/ … @KHNews #Sacramento #CampFire