Home » Economics » Who Bought the $1.47 Trillion of New US National Debt over the Past 12 Months?

Who Bought the $1.47 Trillion of New US National Debt over the Past 12 Months?

Foreign private-sector investors and “foreign official” investors – central banks, governments, etc. – whittled down their holdings of US Treasury Securities by $21 billion at the end of  July, compared to a year ago, to $6.25 trillion, according to the Treasury Department’s TIC data released Tuesday afternoon.

Over the same period, the US gross national debt – fueled by a stupendous spending binge and big-fat tax cuts – soared, despite a booming economy, by a brain-wilting $1.468 trillion, in just 12 months.

So, with foreigners having shed $21 billion over the 12-month period, who bought this $1.468 trillion in new US Treasury debt?

China’s holdings of marketable Treasury securities have remained roughly stable despite the arm-wresting match over trade, with its holdings at the end of July, at $1.17 trillion, up $4.7 billion from a year earlier. 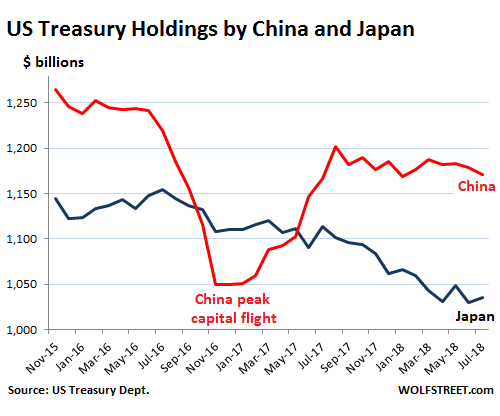 Russia, always a smallish holder of Treasuries compared to China and Japan, has liquidated 90% of its holdings, bringing them from $153 billion in May 2013 to just $14.9 billion in July: 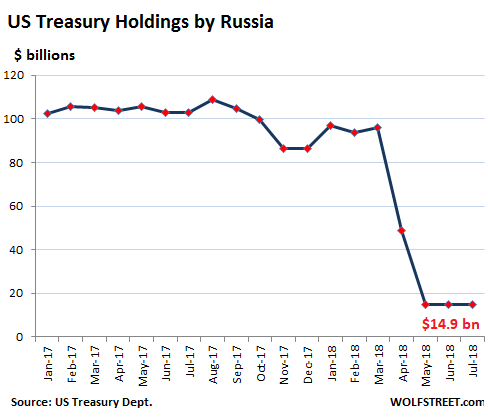 China and Japan have long played an outsized role as creditor to the US government. But their importance has been declining for years due to the growing pile of the US debt, and the simultaneous decline of their holdings. This caused their combined holdings (green line) to drop from nearly 13% of total US government debt at the end of 2015 to 10.4% in July, with Japan’s holdings (blue line) accounting for 4.9%, and China’s (red line) for 5.5%: