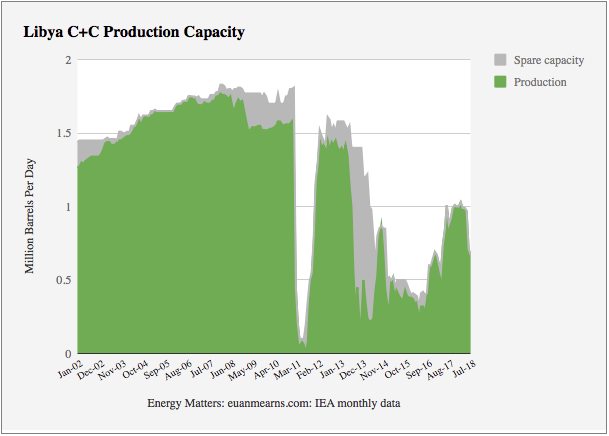 Four months have passed since the last update in May 2018 and it is time to take a fresh look at the global oil market, especially in light of the unique OPEC+Russia+others deal coming to an effective end in July. This led to a predictable fall in the oil price, Brent losing >$6 / bbl on the news, but it has since recovered to >$77 / bbl and looks like it could head north of $80 in the coming weeks. What is going on in the oil markets? Global total liquids production hit a record high of 99.00 million barrels per day in July 2018 while the wheels once again appear to be coming off the wagon in Libya.

Under-reported in the main stream news (MSN) is the fact that unrest seems to have spilled over once more in Libya knocking production back from 970,000 bpd in May to 670,000 bpd in July (inset image up top, Figure 17 below). The FT reported this on July 2:

Libya’s national oil company has suspended crude loadings at two major oil terminals, which together with a separate port blockade is estimated to trigger a drop in production of 850,000 barrels a day just as global outages have tightened the market and fuelled prices.

The dramatic fall in the country’s output, equivalent to almost 80 per cent of its production, comes as Brent has again been rising towards $80 a barrel. This spurred US president Donald Trump to call on Saudi Arabia to release 2m b/d of extra oil on to the market to offset a drop in Venezuela’s output and an expected fall in Iranian barrels.