Delinquencies soar past Financial-Crisis peak at the ca. 5,000 smaller US banks, and these are the Good Times. What’s going on?

The delinquency rate on credit-card loan balances at commercial banks other than the largest 100 – so at the nearly 5,000 smaller banks in the US – rose to 6.2% in the second quarter. This exceeds the peak during the Financial Crisis by a full percentage point and was up from 4.0% a year ago.

But for the largest 100 banks – which carry the majority of the credit-card loan balances – the delinquency rate was 2.4% (seasonally adjusted), the Federal Reserve Board of Governors reported Tuesday afternoon. So what is going on here? 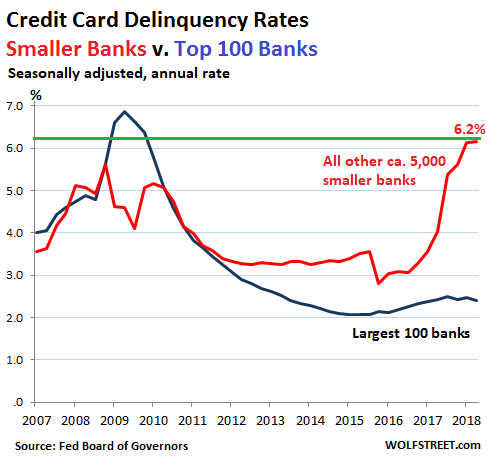 These charge-offs among the largest 100 banks in Q2 rose a fraction year-over-year to 3.6% (seasonally adjusted).

But among the nearly 5,000 remaining banks, the charge-off rate spiked three full percentage points year-over-year to 7.8%, the highest since Q1 2010. The rate among smaller banks had peaked during the Financial Crisis in Q1 2010 at 8.4%: