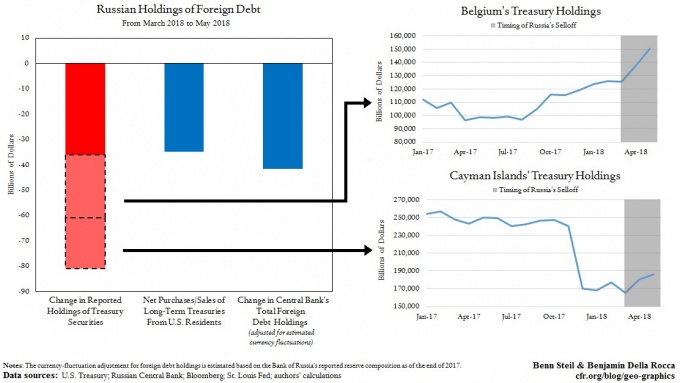 Russia dumped 84% of its American debt,” blared a July CNN headline. Russian central-bank head Elvira Nabiullina said the sales were just part of “diversifying the entire structure of currencies.” But with the U.S. dollar accounting for two-thirds of global foreign-exchange reserves and most (non-intra-eurozone) international trade, dumping this much dollar debt goes well beyond prudent diversification.

Many commentators have therefore speculated that the government was actually protecting itself against future U.S. economic attacks. “It looks like Russia was worried about sanctions and their ability to trade Treasuries,” said one head bond trader, “so they sold.”

Still, the Russian central bank needs dollars, which it has always held mainly in the form highly liquid interest-bearing U.S. Treasuries, to stabilize the ruble through market intervention and to help its banks manage liquidity. Furthermore, Russian president Vladimir Putin has stated that “Russia is not rejecting the dollar” and is “not planning any sudden moves.” This doesn’t jibe with the media headlines.

We therefore decided to explore another possibility: that the headlines are just plain wrong, and that Russia has not sold anywhere near that many Treasuries.

Let us start with U.S. Treasury Department data on holdings of Treasury securities. These do indeed show an $81 billion (84 percent) plunge in Russian-held Treasury debt—from $96 billion in March to $15 billion in May. Other figures, however, suggest that Russia’s actual selloff was much smaller than this.

One indicator is Treasury Department data that track sales, between U.S. and foreign entities, of long-term Treasuries—the sole component of Russia’s Treasury holdings that has dropped since March. From March to May, these data show just $35 billion of Russian sales, as the middle bar in the left-hand box above indicates.

← What Do The Banks Know?  It’s the Debt Cycle (And Other Things) →